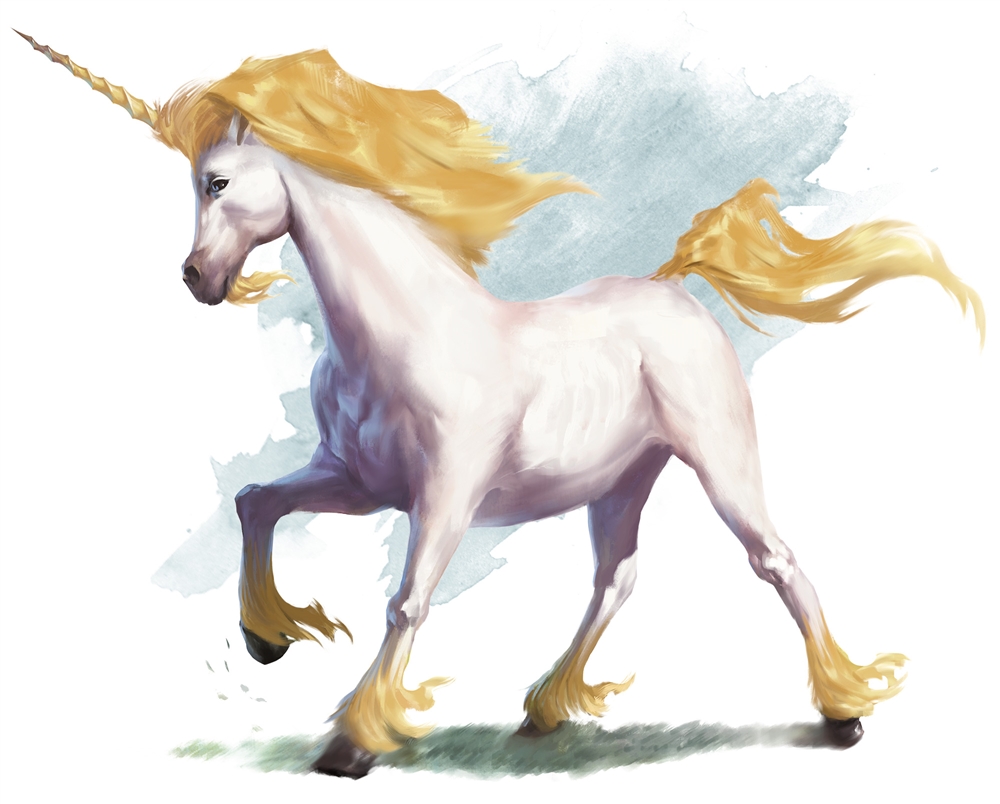 Starburst is a powerful steed with a gleaming coat of pure white hair. His eyes are deep sea blue . Long, silky gold strands of hair hang down from the mane and forelock. A single ivory-colored horn, 2 to 3 feet in length, grows from the center of his unicorn’s forehead. Since Starburst is relatively you (essentially a unicorn teenager) he does not have a fully grown beard yet. Starburst’s hooves of are cloven and yellow-ivory in color.

Starburst speaks his own language as well as those of other sylvan creatures and elves.

Starburst can sense an enemy from 240 yards away. He can move very silently, so opponents are penalized -6 on their surprise rolls. He can kick with his front hooves and thrust with the horn each round. Due to the horn’s magical nature, it always has a +2 bonus to hit.

Starburst has all of the general unicorn abilities shown below:

Unicorns can charge into battle, using the horn like a lance. To make this charge, there must be at least 30 feet of open space between the unicorn and his opponent. Opponents struck by a charging unicorn suffer 3-36 points of damage from impaling. Unicorns may not attack with their front hooves in the round they charge.

Once per day a unicorn can use a teleport spell of limited range. This spell will transport the unicorn (and its rider) to any place that the unicorn desires, up to 360 yards away. Unicorns often use this ability as a last resort to avoid death or capture.

In addition, unicorns can never be charmed or held by magic. They are immune to death spells and make all saving throws against spells as if they were wizards of 11th level. Unicorns are immune to poison.

Lone unicorns occasionally allow themselves to be tamed and ridden by a human or elf maiden of pure heart and good alignment. A unicorn that submits once and is treated kindly will act as the maiden’s steed for life, even carrying her beyond the realm of his forest if she so desires. Unicorns make exceptionally loyal mounts and will protect their riders even unto death.

As a bonded paladin mount of a maiden true of heart, Starburst manifested the ability to transform a single magic item into a figurine of wondrous power. Brie selected a magical ring that could plane shift to be transformed. It was changed into a small statuette a unicorn. It is small enough to fit in a pocket.

If you use an action to speak the Command Word and throw the figurine to a point on the ground within 60 feet of you, the figurine becomes a living creature. If the space where the creature would appear is occupied by other creatures or Objects, or if there isn’t enough space for the creature, the figurine doesn’t become a creature.

If Starburst is brought to zero hit points, then he can use this figurine to shift into the fey wild where he will heal up. He will be unavailable for at least 1 week during this period of healing.

Unlike a normal figuring of wondrous power, Starburst does does not have a limited duration. When invoked, Starburst will remain with Brie for as long as he is needed or wants to.

Unicorns are herbivores, living on tender leaves and grasses, Their only enemies are griffons and those creatures who destroy forests, in particular red dragons and orcs.

The life span of unicorns has never been recorded but is known to surpass 1,000 years. They are believed to maintain their youth until death is only weeks away. The secret to this longevity is the strong magical nature of the horn. Unicorn horns are highly sought after, since possession of one is a sovereign remedy against all poisons. Alternately, a single horn can be used, by an alchemist, to manufacture 2-12 potions of healing. Unicorn horns sell for 1,500 gold pieces or more on the open market. 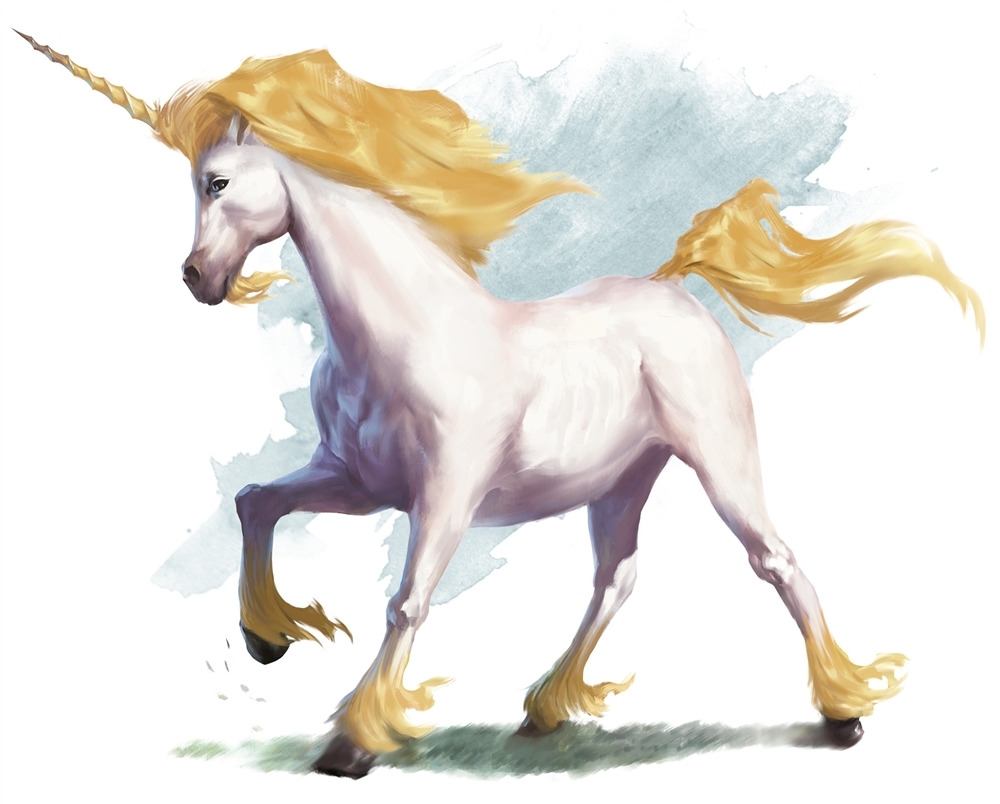