One of his favored possessions is his ring of spell storing. The ring stores 4 spells which are:

Laijutsu – (1 slot, Dex, general)
Laijutsu is the art of fast drawing a melee weapon; unsheathing and sheathing it with blinding speed. Upon learning this NWP, the player must state what weapon it applies to. This is a specific weapon, not just a general class. Thereafter, the character can change to or from that weapon without penalty (changing a weapon, normally requires 1 round), and under certain situations, has a better chance of surprising opponents. To surprise an opponent, the weapon must be sheathed, and the PC must be in a peaceful situation (drinking at a pub, walking down the street, talking to a person at a table, etc.). The PC may then decide to attack, if he makes his NWP check, he may then make a normal surprise check, modified by dexterity reaction adjustment. If the opponent is expecting an attack (in a dungeon standing off waiting for attack, etc.) and the PC’s weapon is sheathed, then they may surprise also, but instead use 1d20 to determine surprise chance of success instead of 1d10, with the same chances and modifiers as above.

Leatherworking – (1 slot, general, Int)
This proficiency enables a character to tan and treat leather and to make clothing and other leather objects. The character can make leather armor, as wells backpacks, saddlebags, saddles, and all sorts of harnesses.

Rope Use – (1 slot, general, Dex)
This proficiency enables a character to accomplish amazing feats with rope. A character with rope use proficiency is familiar with all sorts of knots and can tie knots that slip, hold tightly, slide slowly, or loosen with a quick tug. If the character’s hands are bound and held with a knot, he can roll a proficiency check with a -6 penalty to escape the bonds. This character gains a +2 bonus to all attacks made with a lasso. The character also receives a +10% bonus to all climbing checks made while he is using a rope, including attempts to belay companions.

Set Snares – (1 slot, rogue, Dex +1)
The character can make simple snares and traps, primarily to catch small game. These can include rope snares and spring traps. A proficiency check must be rolled when the snare is first constructed and every time the snare is set. A failed proficiency check means the trap does not workmanship was bad, the character left too much scent in the area, or he poorly concealed the finished work. The exact nature of the problem does not need to be known. The character can also attempt to set traps and snares for larger creatures. A proficiency check must be rolled, this time with a -4 penalty to the ability score. In both cases, setting a successful snare does not ensure that it catches anything, only that the snare works if triggered. The DM must decide if the trap is triggered.
Thief characters (and only thieves) with this proficiency can also attempt to rig mantraps. These can involve such things as crossbows, deadfalls, spiked springboards, etc. The procedure is the same as that for setting a large snare. The DM must determine the amount of damage caused by a mantrap.
Setting a small snare or trap takes one hour or work. Setting a larger trap requires two to three people (only one need have the proficiency) and 2d4 hours of work. Setting a mantrap requires one or more people (depending on its nature) and 1d8 hours of work. To prepare any trap, the character must have appropriate materials on hand. Characters with animal lore proficiency gain a +2 bonus to their chance of success when attempting to set a snare for the purposes of catching game. Their knowledge of animals and the woods serves them well for this purpose. They gain no benefit when tempting to trap monsters or intelligent beings.

Tumbling – (1 slot, rogue, Dex)
The character is practiced in all manner of acrobatics—dives, rolls, somersaults, handstands, flips, etc. Tumbling can only be performed while burdened with light encumbrance or less. Aside from entertaining, the character with tumbling proficiency can improve his AC by 4 against attacks directed solely at him in any round combat, provided he has the initiative and foregoes all attacks that round. When in unarmed combat he can improve his attack roll by 2. On a successful proficiency check, he suffers only one-half the normal damage from falls of 60 feet or less and none from a fall of 10feet or less. Falls from greater heights result in normal damage.

Spellcraft – (1 slot, wizard, Int -2)
Although this proficiency does not grant the character any spellcasting power, it does give him familiarity with all different forms and rites of spellcasting. If he observes and overhears someone who is casting a spell, or if he examines the material components used, he can attempt to identify the spell being cast. A proficiency check must be rolled to make a correct identification. Wizard specialists gain a +3 bonus to the check when attempting to identify magic of their own school. Note that since the spellcaster must be observed until the very instant of casting, the spellcraft proficiency does not grant an advantage against combat spells. The proficiency is quite useful, however, for identifying spells that would otherwise have no visible effect. Those talented in this proficiency also have a chance (equal to ¼ of their normal proficiency check) of recognizing magical or magically endowed constructs for what they are.

Quintus came into the realms during trying times for his family. He was the child of Jhaunadyl Cormaeril and an unknown father. In the year 1341 the Fire Knives, an organization of thieves and scoundrels, were driven from Cormyr. Soon after, the crown discovered ties between the Fire Knives and certain noble families including the Bleth’s and the Cormearil’s.

Jhaunadyl and her young son were exiled along with the rest of the Cormaeril clan after their lands were confiscated and titles lost. They ended up in Westgate along with a number of the clan members.

Quintus has some vague recollection of various visitors who took interest of him. These memories include a kindly, vibrant and vigorous old man who’s pipe would float around in his wake. Quintus remembers that the old man, with a twinkle in his eye, taught him to create the illusion of a butterfly. Quintus found this illusion fascinating and delightful. It was a ray of light into an otherwise dismal situation.

Jhaunadyl saw to it, out of necessity, that her young son received training of certain roguish skills from Cormaeril clan members. Although, not a member of the Fire Knives, Quintus is known to many of them and well regarded in their organization.

As her son grew older, Jhaunadyl knew she needed to get out of Westgate lest her son fall victim to a variety of lawless elements in the city. She managed to return to the city of Arabel in Cormyr under an alias.

In Arabel, there were visitors who would offer education and training for a variety of skills. Quintus did not understand the purpose and was occasionally bored by this. Nevertheless, over time he became adept and reading and understanding contracts and contract law within Cormyr. In addition, Jhaunadyl trained Quintus in diplomacy and etiquette.

Jhaunadyl took notice when she caught her son making mischief with illusions of bugs, snails and slugs in the kitchen. She saw to it that a very fat wizard, Regwald Harpell, would periodically teleport to the little cottage where they lived to provide arcane training and discipline.

Jhaunadyl also would often regale her son in the evenings with stories of adventurer’s in the realms. This implanted the desire to become an adventurer and experience the thrill of encountering magical beasts and looting piles of treasure. Perhaps it would one day be enough to help his mother regain her lost lands and title.

Finally, the day came for Quintus to leave home. Jhaunadyl tearfully kissed her son goodbye. She gave him two gifts. Both items, she told him were Cormaeril family heirlooms.

The first item was a key ring. The key ring itself appeared to be made from a metal that Quintus had never seen before, Adamantine. It was enchanted so that any key placed on the ring would be silent. It came with a total of 5 keys on the ring. Quintus soon learned that most other keys would not attach to the ring. Jhaunadyl informed him that these keys were for a specific purpose and were to be used only with the second item. Each of the keys was made from a gold alloy. Quintus knew immediately that this was something that he must keep hidden on his person.

The second item, another Cormaeril family heirloom, was a pair of bracers. They were emblazoned with the coat of arms of house Cormaeril. On the inside of each bracer is a key slot. On close examination, Quintus concluded that the keys on the key ring would fit the key slot on the bracers. There are a number of arcane glyphs and markings around the key slot.

The bracers provide AC4 and once per day can allow the wearer to dodge an attack. 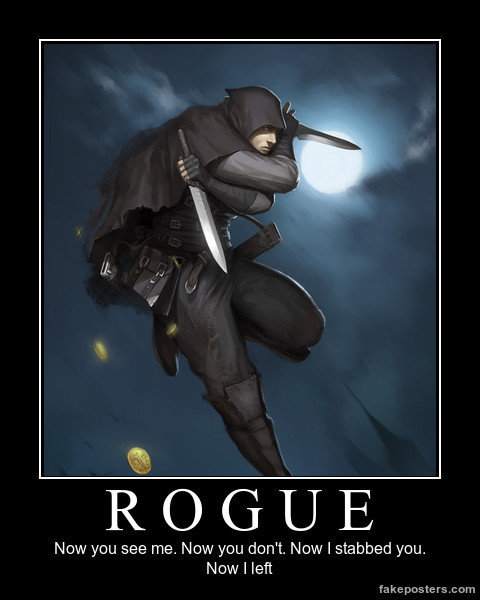