Elysia appears as a rather small humanoid woman but, with dragonfly wings. Her wings are 4-5’ long and translucent and full of iridescent colors. Her long golden hair appears to be always floating and wafting in the wind.

She appears as shown in the picture. Occasionally, will appear with diaphanous flowing robes that accentuate her hair and wings.

Elysia speaks common and her own musical language of the sylphs.

Like all sylphs, Elysia will defend herself with magical abilities only. She does not normally carry a weapon. After some training she will learn the ability to cast any spell in her companion’s spell book but, with some restrictions. She will always prefer spells of elemental air over any other choice. She will never cast any elemental earth based spells. She will cast all wizard spells (that she knows) as if she were a 7th level wizard.

She does not require a spell book. She will learn spells based on what her companion has memorized. If there are spells in Haldir’s spell book that he has not memorized in her presence she will not be able to cast them.

She will use her spell abilities to defend herself and her companion. She will rarely use spells offensively without provocation. She will defend other party members only in circumstances where her companion is threatened and only if they have been treating her with respect.

She currently knows the following spells:

Elysia can turn invisible at will and can summon an air elemental once per week.

When Haldir reaches 7th Level (or 6/6 in his case) she can bond with Haldir to grant flight (per the Wizard Spell Fly) once per long rest. Bonding is a very private and intimate. Elysia will discuss this privately with Haldir when the time is right.

The young mage/cleric Haldir Thaliun felt the need for a companion for his coming adventures. After some research, he traveled to the ancient elven forest of Cormanthor (now in the heartland of the kingdom of Cormyr). After some searching he found an idyllic spot and prepared to cast his spell.

Time slowed and a feeling a peace infused his being. He noticed that the colors of the forest appeared more vibrant. He began to feel the energy flowing through the forest. He could almost make out the gentle harmony of the trees and elemental creatures of the forest.

After some time, he came to his senses feeling refreshed and at peace. A gentle breeze teased his hair about and after a few minutes, a beautiful sylph made herself known to him. She, in that uncanny way of women of all races, looked into his heart and saw him as a true and good person. She accepted him as her companion and has declared herself Elysia Melethril o’ Haldir.

She was the protector of an extended family of young sylphs many sisters and cousins (all female) and requested safe haven for them. Haldir suggested the small shop Curiosities and Acquisitions that had sponsored him and his company of adventurers. The shop is now infested with young sylphs.

And so began the adventures of the sylph and mage. 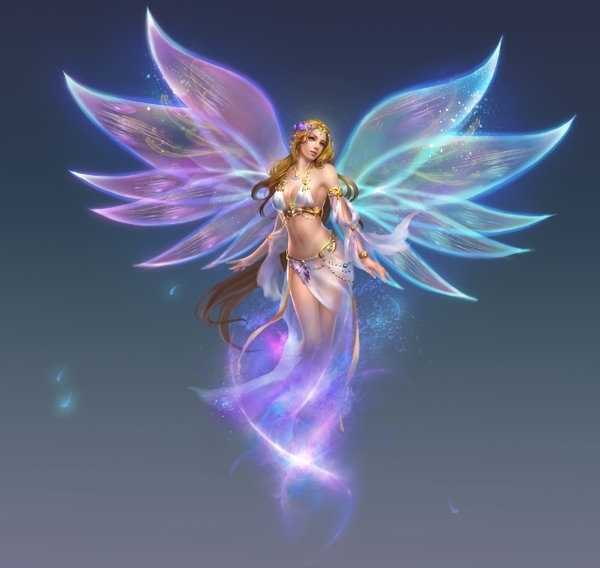