Captain of the Foe Hammer 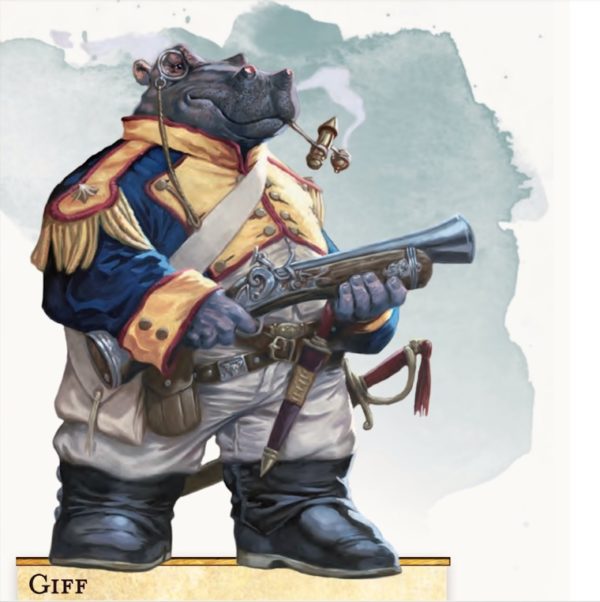 It’s easy to spot the giff in a room: a group of 7-foot-tall, hippopotamus-headed humanoids attired in gaudy military uniforms, with gleaming pistols and muskets on display. These spacefaring mercenaries are renowned for their martial training and their love of explosives.

Military Organization. Every aspect of giff society is organized along military lines. From birth until death, every giff has a military rank. It must follow orders from those of superior rank, and it can give orders to those of lower rank. Promotions don’t depend on age but are granted by a superior as a reward for valor. Giff are devoted to their children, even as most of their education is geared toward fighting and war.

Mercenaries Extraordinaire. Giff are in high demand as warriors for hire, but they insist on serving in units composed entirely of giff; a giff hiring itself out individually is unheard of. Giff refuse to fight other giff, and will never agree to a contract unless it stipulates that they can sit out a battle rather than wage war against their kin. A giff prizes the reputation of its unit above its own life. Life is fleeting, but the regiment endures for generations or even centuries. Separated from your company, you must take on work while trying to find your way back.

A Whiff of Gunpowder. Muskets and grenades are the favorite weapons of every giff. The bigger the boom, the brighter the flash, and the thicker the smoke it produces, the more giff love a weapon. Their skill with gunpowder is another reason for their popularity as mercenaries. Giff revel in the challenge of building a bomb big enough to level a fortification. They gladly accept payment in kegs of gunpowder in preference to gold, gems, or other currency.

No Honor in Magic. Some giff become wizards, clerics, and other kinds of spellcasters, but they’re so infrequent that most giff mercenary units have no magical capability. Typical giff are as smart as the average human, but their focus on military training to the exclusion of all other areas of study can make them seem dull-witted to those who have more varied interests.

Headfirst Charge
The giff can try to knock a creature over; if the giff moves at least 20 feet in a straight line that ends within 5 feet of a Large or smaller creature, that creature must succeed on a Strength saving throw or take 7 (2d6) bludgeoning damage and be knocked prone. The DC for this saving throw equals 8 + your Strength modifier + your proficiency bonus and the damage increases to 3d6 at 6th level, 4d6 at 11th level, and 5d6 at 16th level.

Firearms Knowledge
Your training from a young age grants your proficiency with muskets and pistols and also enables you to ignore the loading property of these weapons.

Fragmentation Grenade
Your thorough training and love for gunpower allows you throws a grenade up to 60 feet. Each creature within 20 feet of the grenade’s detonation must make a DC 15 Dexterity saving throw, taking 17 (5d6) piercing damage on a failed save, or half as much damage on a successful one.

His mission is top secret. He was on patrol through the Tears of Selune. His ship was struck you see. It’s helmsman knocked unconscious. Whereupon, his ship was caught in the gravitational pull of the planet and dropped here.

He wants to get back to his fleet. His fleet was hired to ensure the safety of this world from threats beyond, distant places, the far realm, what what.

The far realm, mind flayers… illithids.. all that. 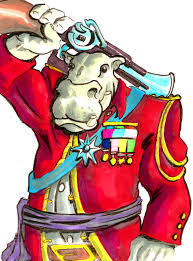