The camera zoomed in on the Legion of Hope. The band of adventurers cautiously edged their way into an amazing chamber. 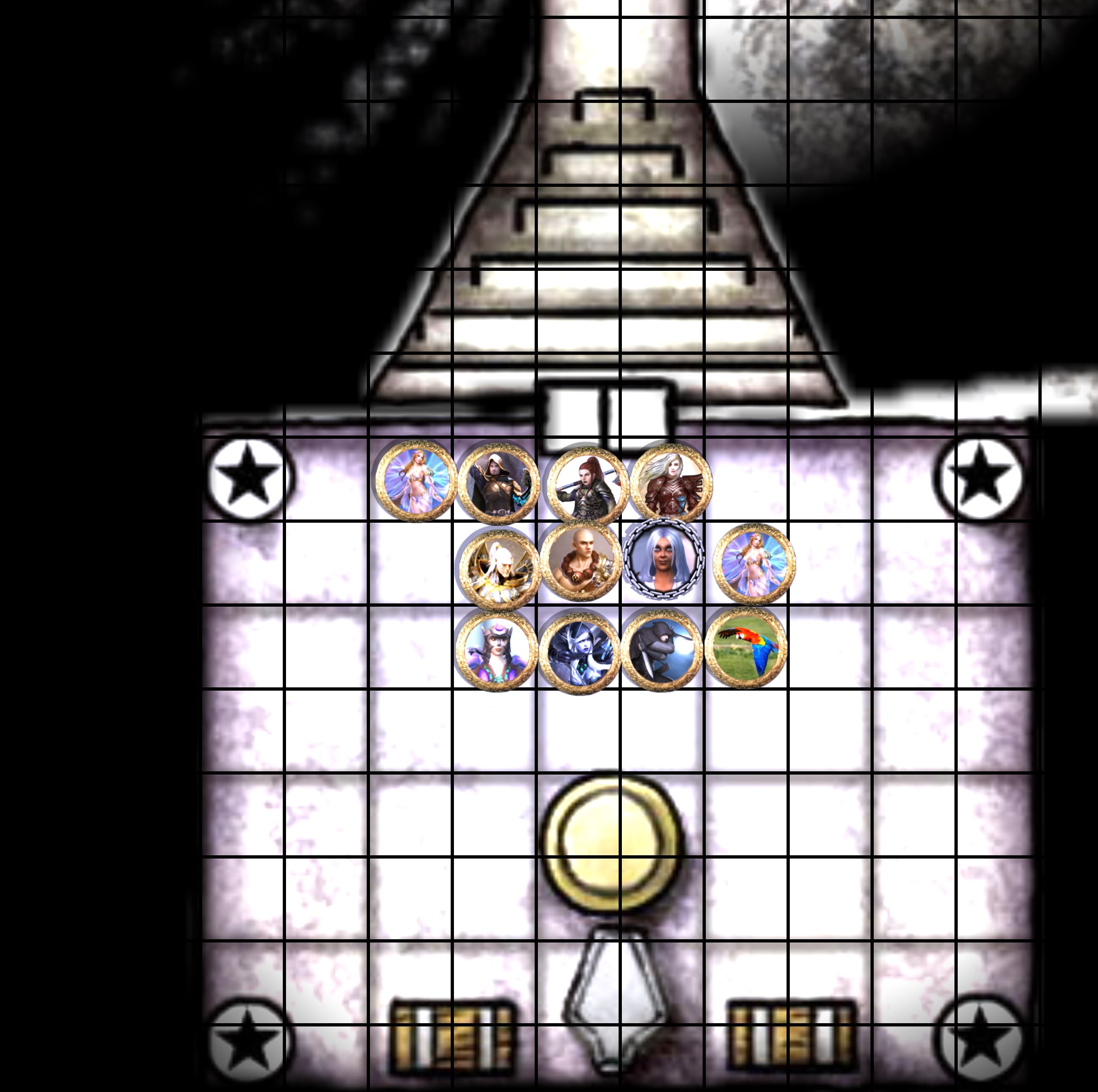 This imposing chamber has a silvered ceiling, just as the foyer has, so it is bright. The walls are of ivory with gold inlaid. The floor is polished (but common) agate. In each corner hulks a 9’ tall statue of black iron. That to the northeast stands with a saw-toothed two-handed sword raised to strike; that to the northwest a huge, spike-ended mace; to the southeast the sculpture readies a wickedly spiked morning star, and the one in the southwest has a voulge. 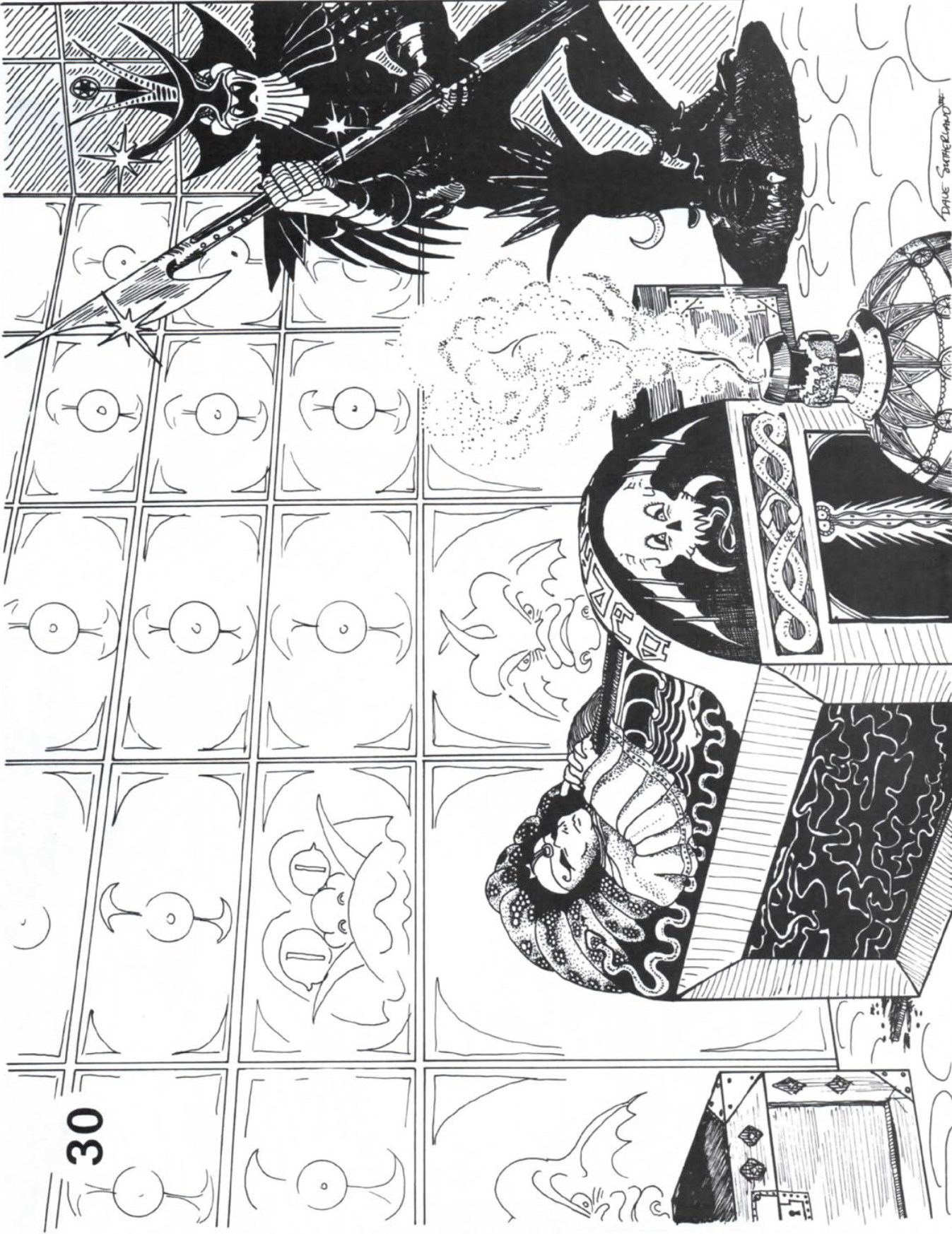 Quintus began to examine the room with Maxwell his BFF. Although Jenierissa may have something to say about that.

First he examined the Iron Chests.

Each of these massive iron boxes is set into the stone and has triple locks set with poison needle traps. Neither can possibly be moved, and both show marks of prying, battering, etc. The eastern chest holds 10, 000 gems which will appear to be of not less than base 50 g.p. value each, no matter how they are tested in the dungeon. Each is actually a 1 g.p. quartz gem. The other contains 10,000 copper pieces magicked to appear as platinum until they are removed to a distance of 13 miles from the Tomb, when their true nature becomes evident.

After Quintus disabled each of the traps and picked the locks, Maxwell pointed out the magical trickery and you left the copper and gems behind.

Quintus moved on to an examination of the granite sarcophagus.

The huge outer shell has the glyphs spelling ACERERAK on the lid in platinum. The far end of the thing is stove in and shattered. Inside can be seen bits of a wooden inner shell, a few bones, destroyed jewelry (stones pried out), torn bits of robes and windings, dust, and a broken staff of the magi (evident from the runes upon it). A shattered skull rolled out as Quintus poked around.

You moved onto an investigation of the Bronze Urn.

This gold filigreed container is very large, and a thin stream of smoke issues from a tiny vent in its brass stopper which is sealed shut with gold fill.

Quintus wanted nothing to do with the urn so Fria stepped foward and pried the gold fill from the stopper. She steeled her nerve and, with a glance back at the party, opened the urn.

A loud hissing commenced as the vapor from the urn shot into the air. In mere moments a large efreeti appeared and towered over Fria. 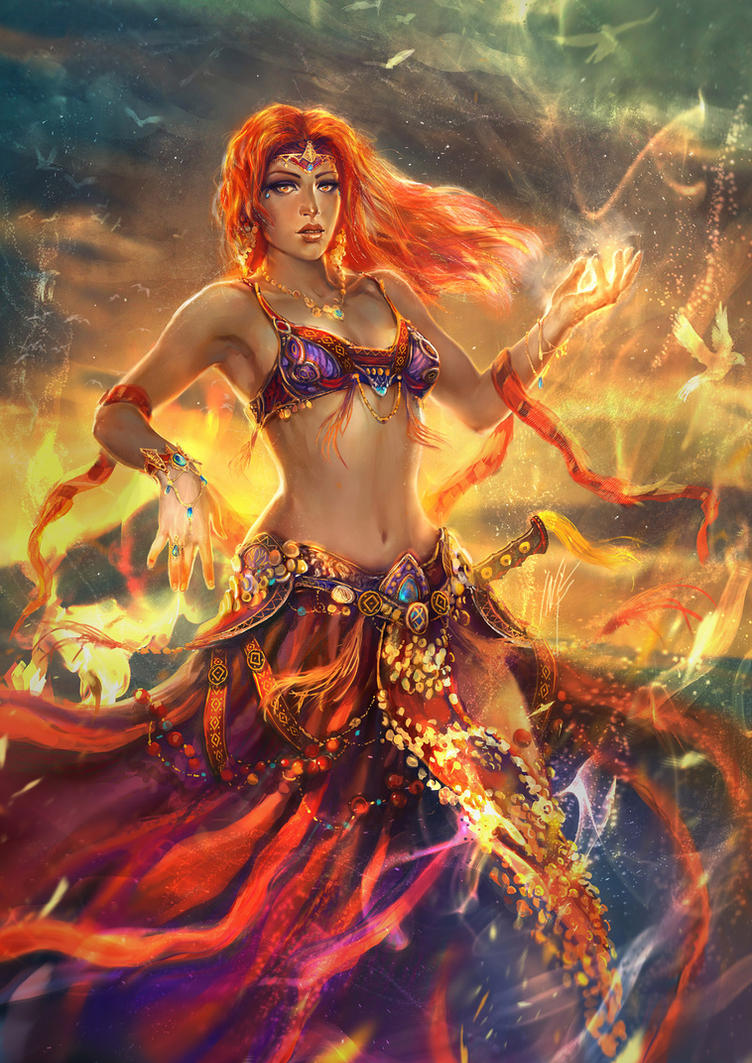 Fortunately, no party member had disturbed the urn. It turned out that the Efreeti was not angry and was willing to perform three services (wishes) for Fria.

Fria used her first wish to fix the broken staff of the magi. Since that wish was not for Fria, but for one of her party, the Efreeti granted it. This also pre-desposed the Efreeti to look upon Fria’s other wishes more favorably.

Fria’s second wish was to restore Winter’s memories. This wish mostly worked. However, there are a few things that Winter just can’t recall. Her mental anguish and trauma was that bad.

Fria’s third wish was for the strength of a Fire Giant (STR 22). Fria had used her first two wishes for others so, the Efreeti granted Fria this request without any penalty. There is one side effect; Fria’s white hair now has red tints and highlights.

The Efreeti blew a kiss to Fria and departed. Fria feels the warmth of the Efreeti’s kiss though the rest of you are sure that there was no physical contact.

Eventually, you started messing with the iron statues. Quintus pulled out his paint set and painted away arms and legs of the NW statue. Eventually you managed to move what was left and discovered a ring pull which will raised a small plug of stone and enabled the party to enter a small chute which took them 10’ down to the corridor to the west.

This corridor led to a intersection with a secret door on the south wall and a right turn to the north. Following the north passage, it turned west, then south and Quintus passed through two sets of doors. The next door to the south turned out to be a one way door.

Quintus circled back around. Luckily, there were three swords left over from the creation spell and Quintus was able to return to the party.

You began to examine the secret door. With careful inspection you discovered that the wall at this location had a small opening that is metal-lined — obviously a keyhole! You inserted the FIRST (gold key from 19) KEY and the door will sink into the floor, a stone sheathed adamantine slab of tremendous thickness.

The smallish 10′×20′ burial vault has an arched celling with a 25’ peak. There is absolutely nothing in the room, although there is a small depression a few inches deep and about 2’ square in the center of the floor. Careful inspection will discover a small hole in the middle or this depression — another keyhole!

After some experimentation and discussion, you inserted the SECOND KEY into the keyhole. It fit perfectly but, nothing happened. Eventually, you turned the key three times to the right and … gasp … Suddenly you could feel trembling throughout the room.

You all scrambled out of the crypt and avoided being squished. In the south half of the crypt there was now a huge mithril vault. There was a door in the center of the device, with an inset ring. With a hard pull it opened you could see inside. 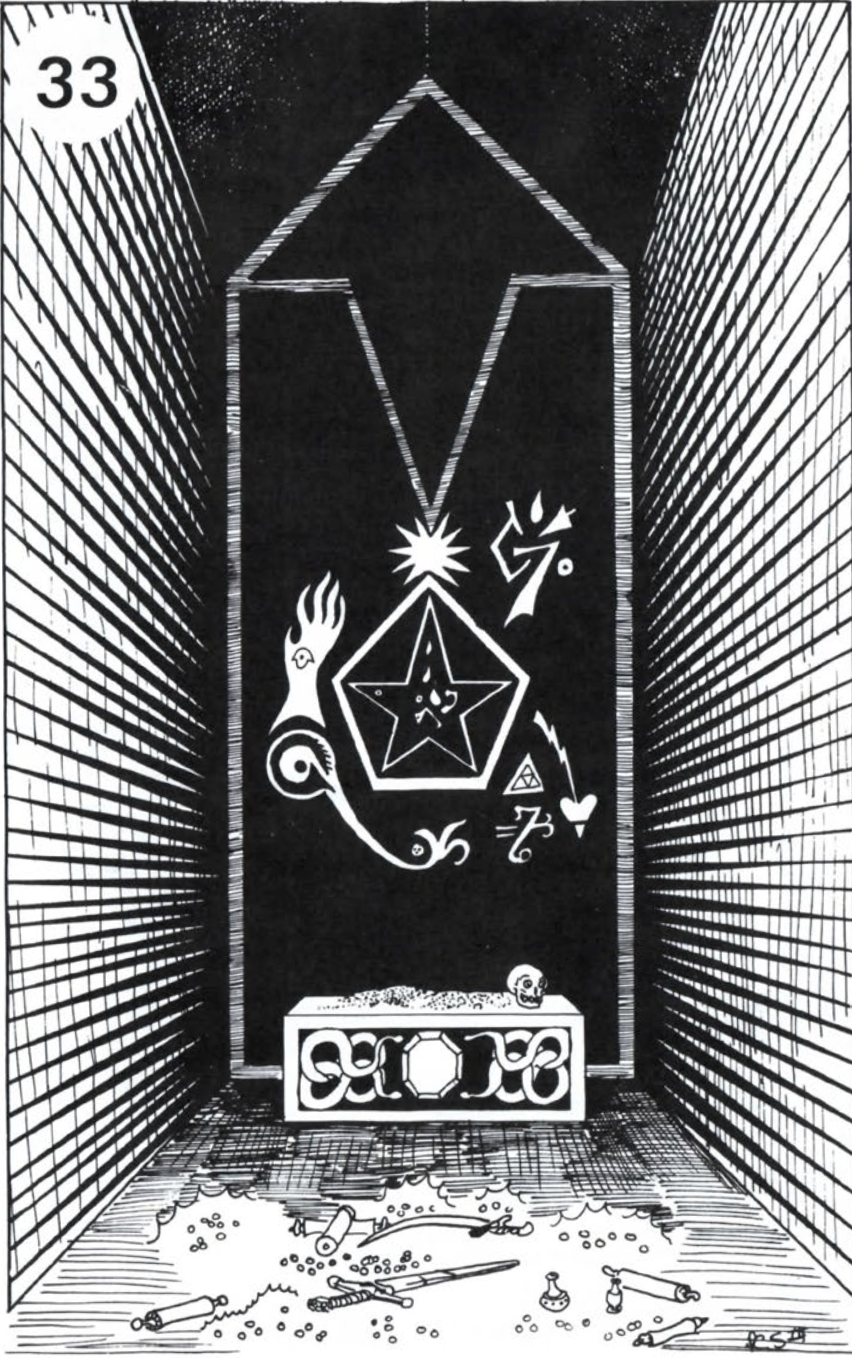 Nothing else happened at first. When someone went into the vault, the dust swirled into the air and formed a man-like shape. You started attacking it but, it didn’t do anything else. At this point Haldir cast a spell at the skull. Yes, this was the demi-lich of Acerak himself. Haldir had a VERY bad feeling! 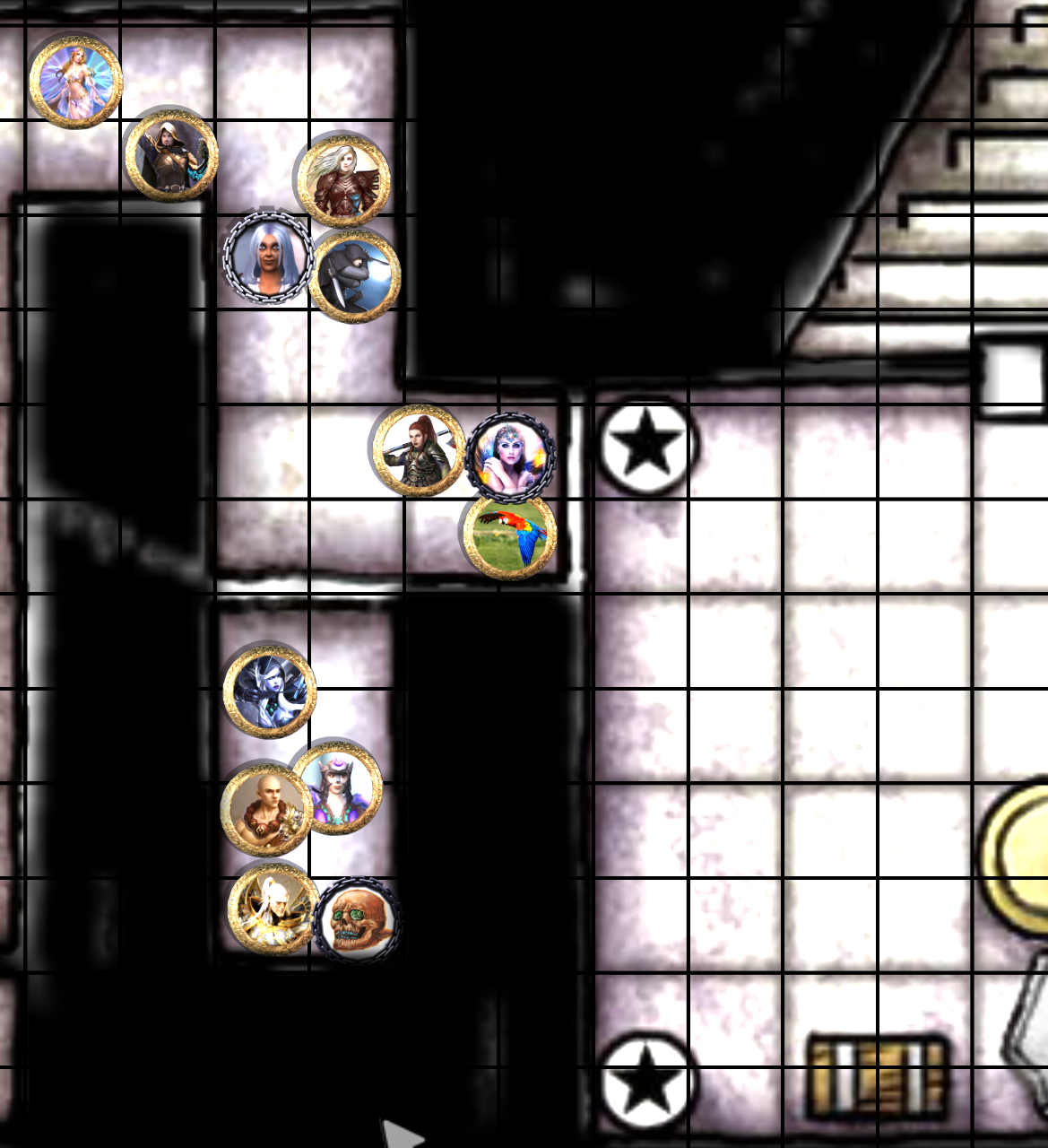 It rose up into the air and began to scan the party. You quickly started attacking it. But, most of your attacks were ineffective. 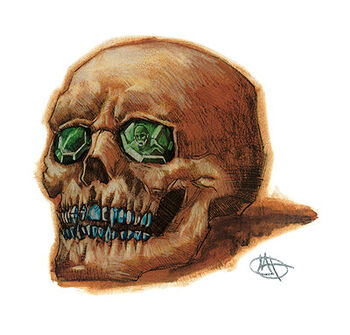 Winter, having lived through this horror before, steeled herself and relied on her reinstated faith in Pelor. She stepped boldly forward and put forth a mighty command that turned the demilich!

Marg added her will and faith to the turn and the skull began to bump against the wall in the corner like a lost balloon.

Sigh… how anticlimactic. I rolled a ten on initiative, and none of the legendary reactions were designed to combat a clerical turn.

You fled the vault. After some discussion, a few rounds later you sent someone to pick up some more of the lich dust. Fortunately, the demi lich skull was just sitting there and didn’t do anything. 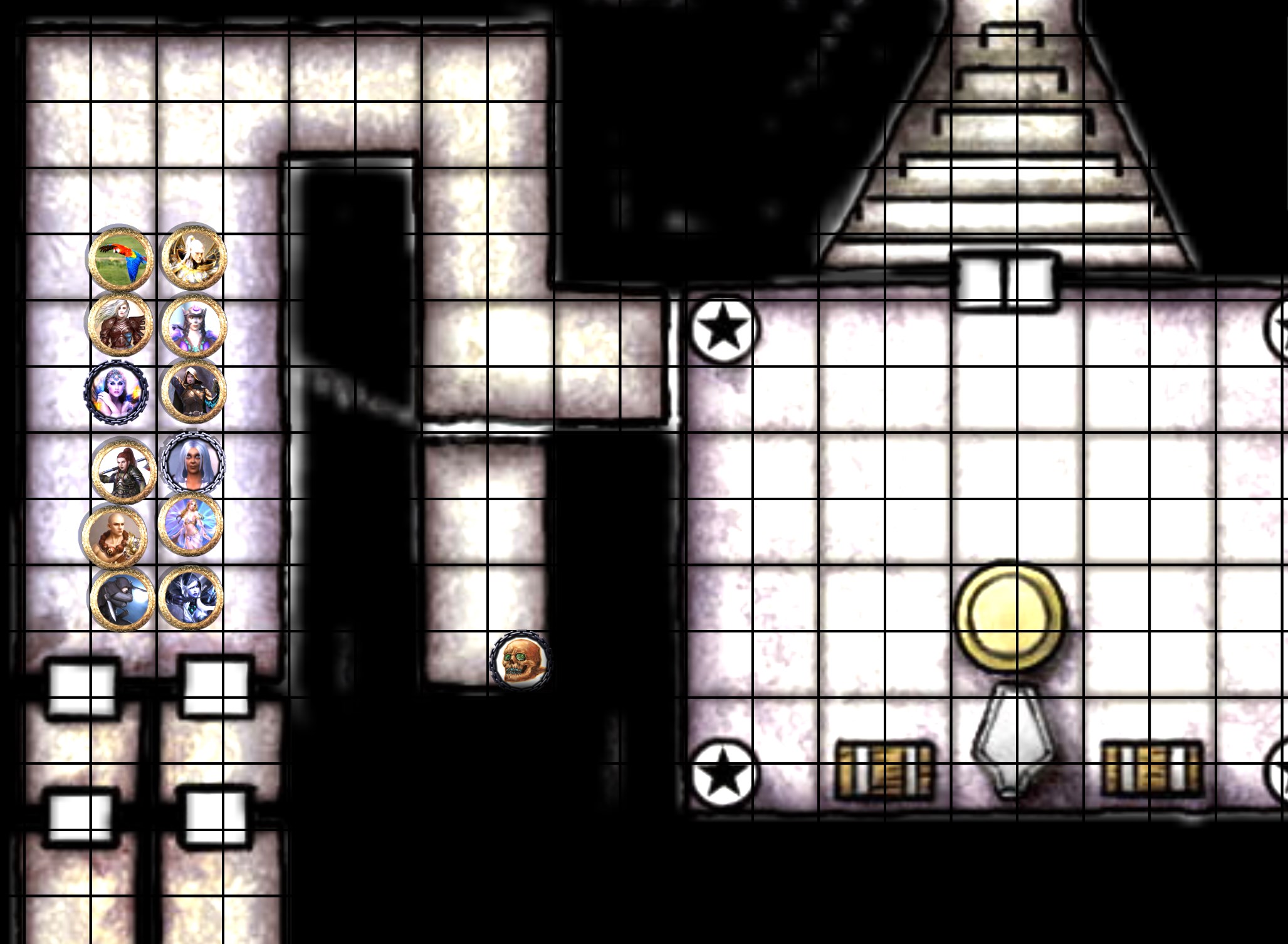 You returned to the Devil Face in the beginning of the dungeon. Lich dust was distributed among the party members and with a leap of faith, you stepped through.

A little retcon, before stepping through the devil’s mouth the party returned to the bucket room where you rested before. Quintus and Haldir took the opportunity to identify the treasure that Safwin grabbed.

You arrived on a platform. You immediately feel the supernatural cold and are chilled to the bone within a few moments. 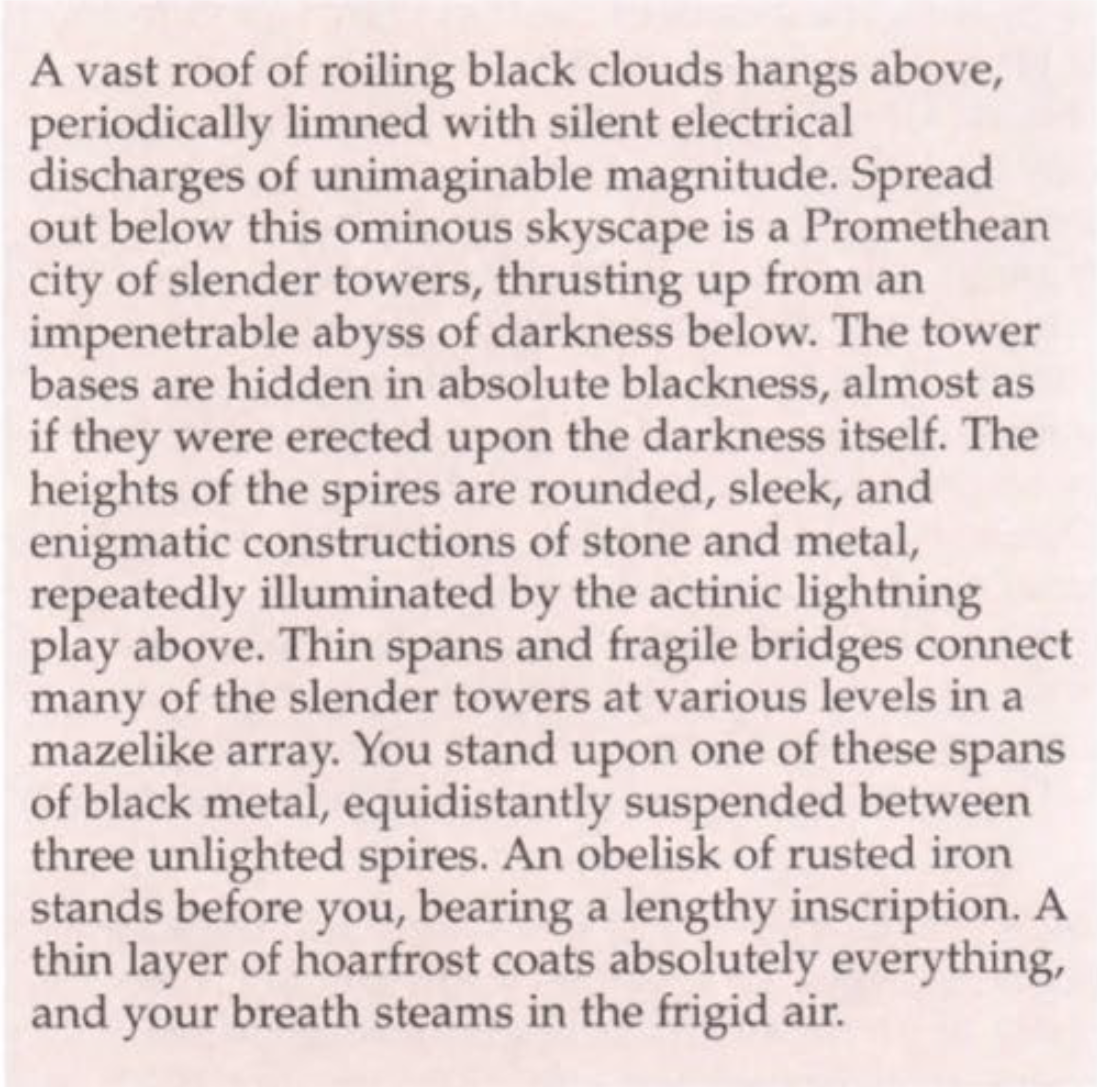 You stepped forward to examine the obelisk 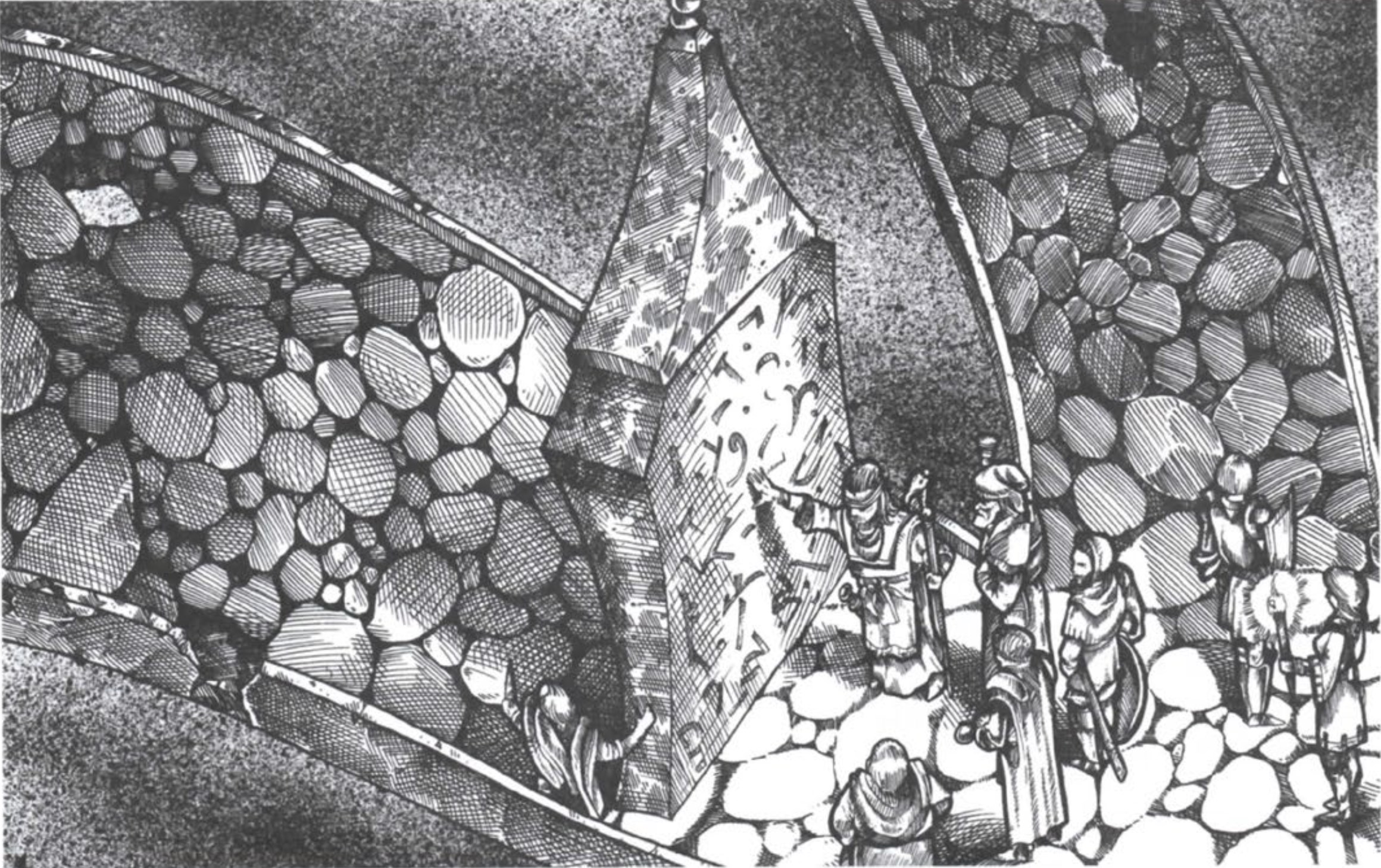 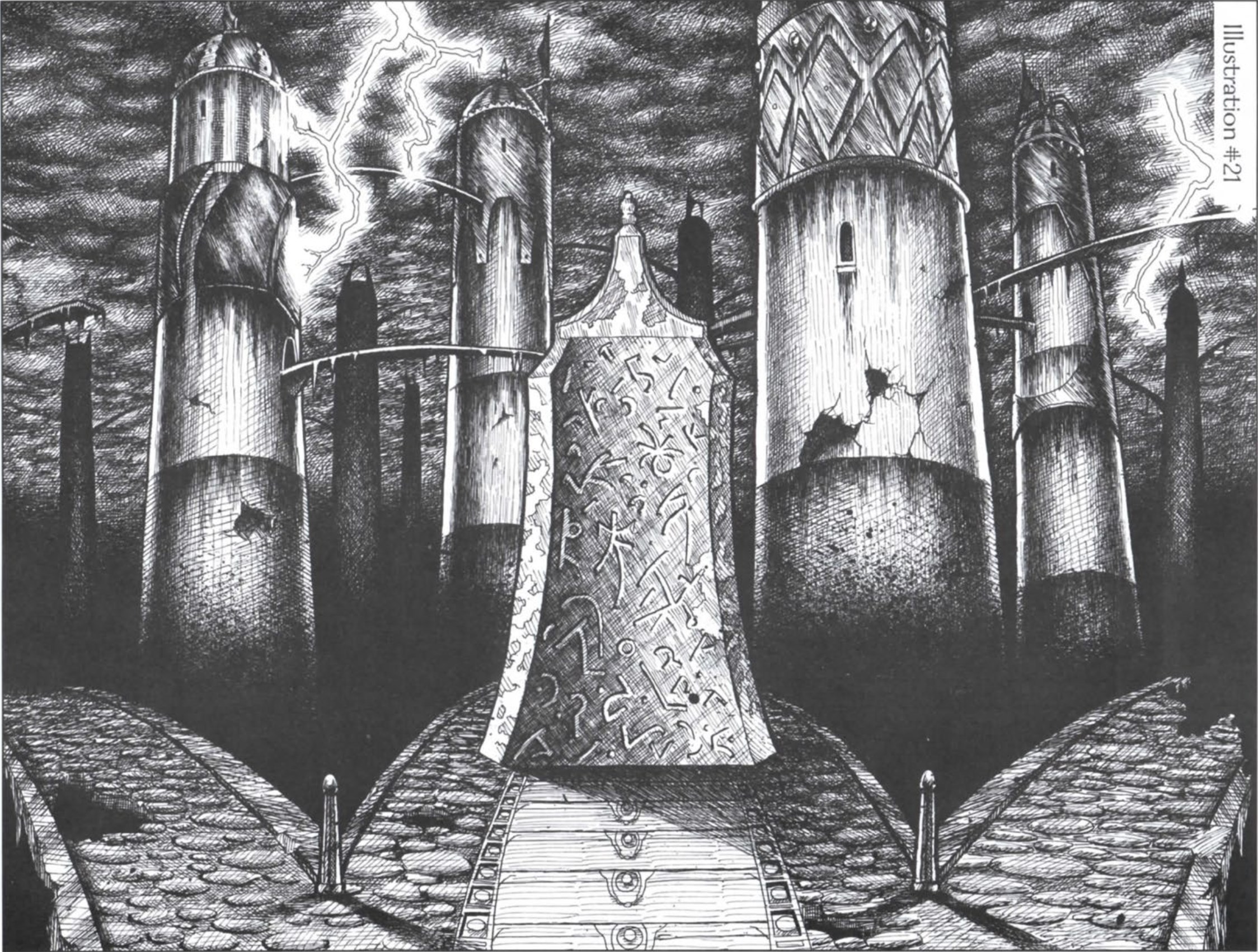 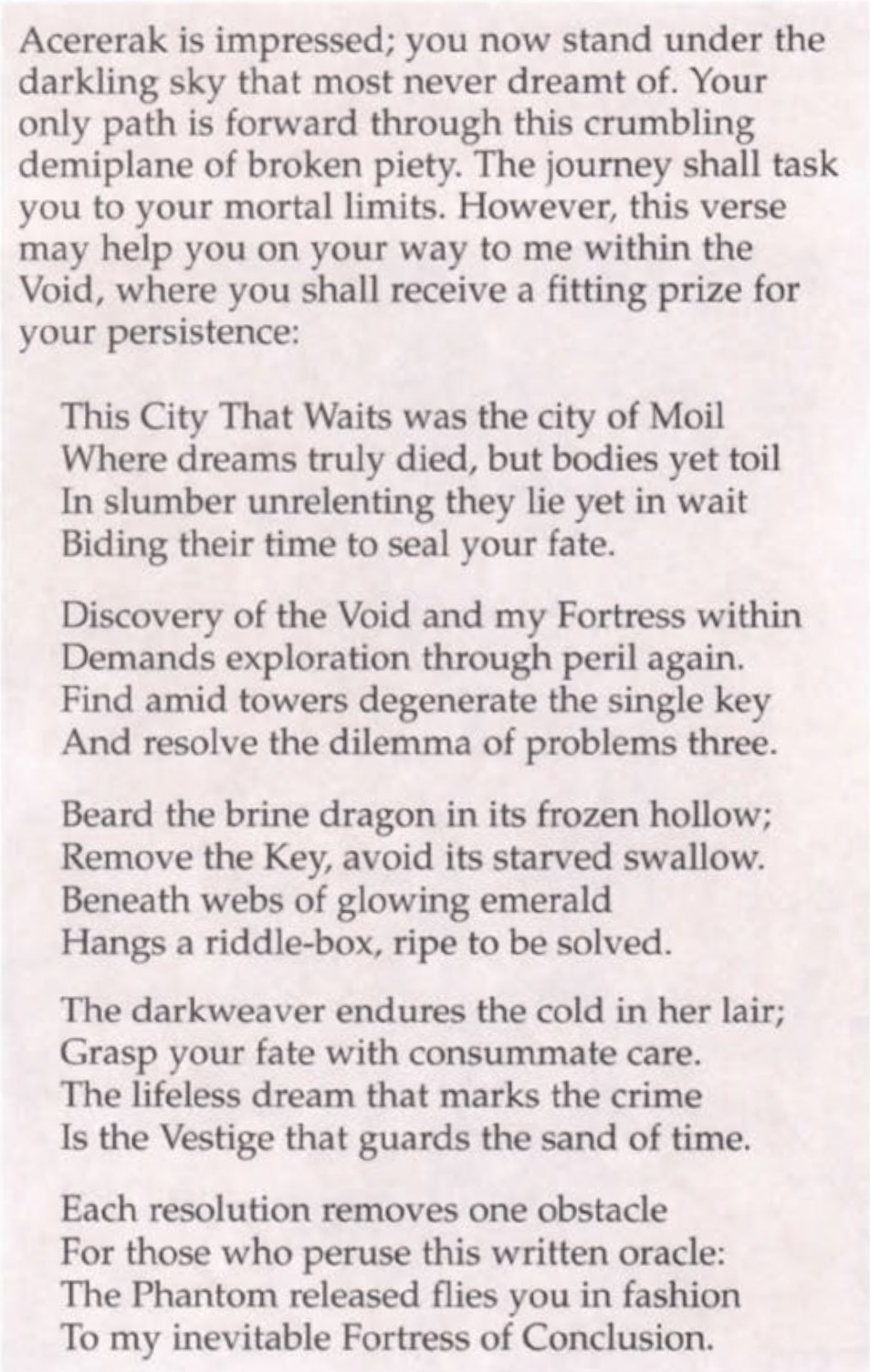 With the party shivering in the cold, the camera zoomed out and we concluded this episode.

Welcome to the Demi-Plane of Dread

We shall resume with the retcon of loot identification next time.

Chilly Considerations The City that Waits exploration begins (what is it waiting for?)