Farewell to the city

We joined the Legion of Hope as the intrepid band of adventurer’s prepared to enter the Icy Tower. BUT WAIT, first there was a different tower to enter.

During our hiatus over the summer I forgot a number of things. Sigh… oh well.. It’s all good. Plot immunity was granted to and from the Icy Tower.

The party approached the entrance to the Dreaming Tower.

The party bridge led south into a 20-foot-wide arched opening on the sleek side of a tower of gray stone and metal. The lintel of the arch was inscribed with a half-moon of inlaid silver, with a sprinkling of stars picked out with small gemstone flecks, although the layer of frost covering the carving made it difficult to see clearly. Beyond the arch, darkness and silence prevailed.

Following the footsteps of a Find the path spell, the party entered the tower

The glowing blue divine footsteps led you directly to the center of the tower and you chose to follow the right-hand hallway. 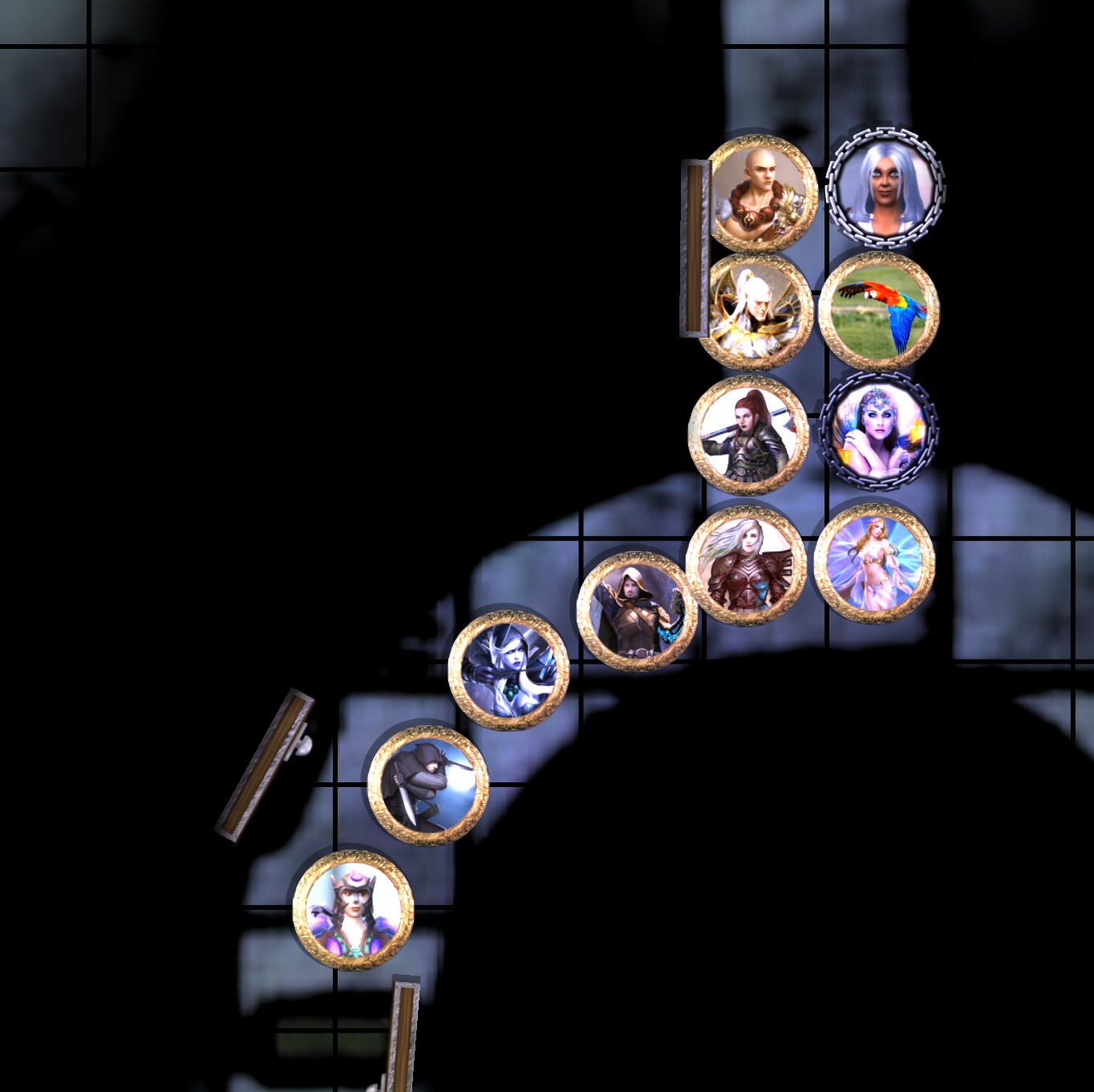 When you opened the door, you saw a massive chamber that was dimly but erratically lit through a wide opening in the wall to the south. You could see that some destructive force had smashed a rough hole in the stone floor. Cracked, splintered edges of the hole trace a chasm more that 100 feet wide from east to west, and perhaps half that north to south. The chasm lays bare the massive support column of iron and stone occupying the center of the tower.

Your eyes could trace the line of the wide column down into the lightless shell of the lower tower – truly a Stygian plunge – until darkness swallowed its lower extent completely. Revealed through the shattered remains of the floor was a small, circular platform 30 feet below the level of the rest of this chamber, attached to the side of the support column. The light is insufficient to provide positive identification to the dim objects just visible upon the platform.

You cautiously entered the chamber. Your caution was needed as you noticed and avoided the structurally unsound edges of the large hole in the floor.

Within a moment or two, you noticed a bizarre river of fog that poured in from the opening in the south wall. You began to hear the whispers of many tortured souls as it approached. 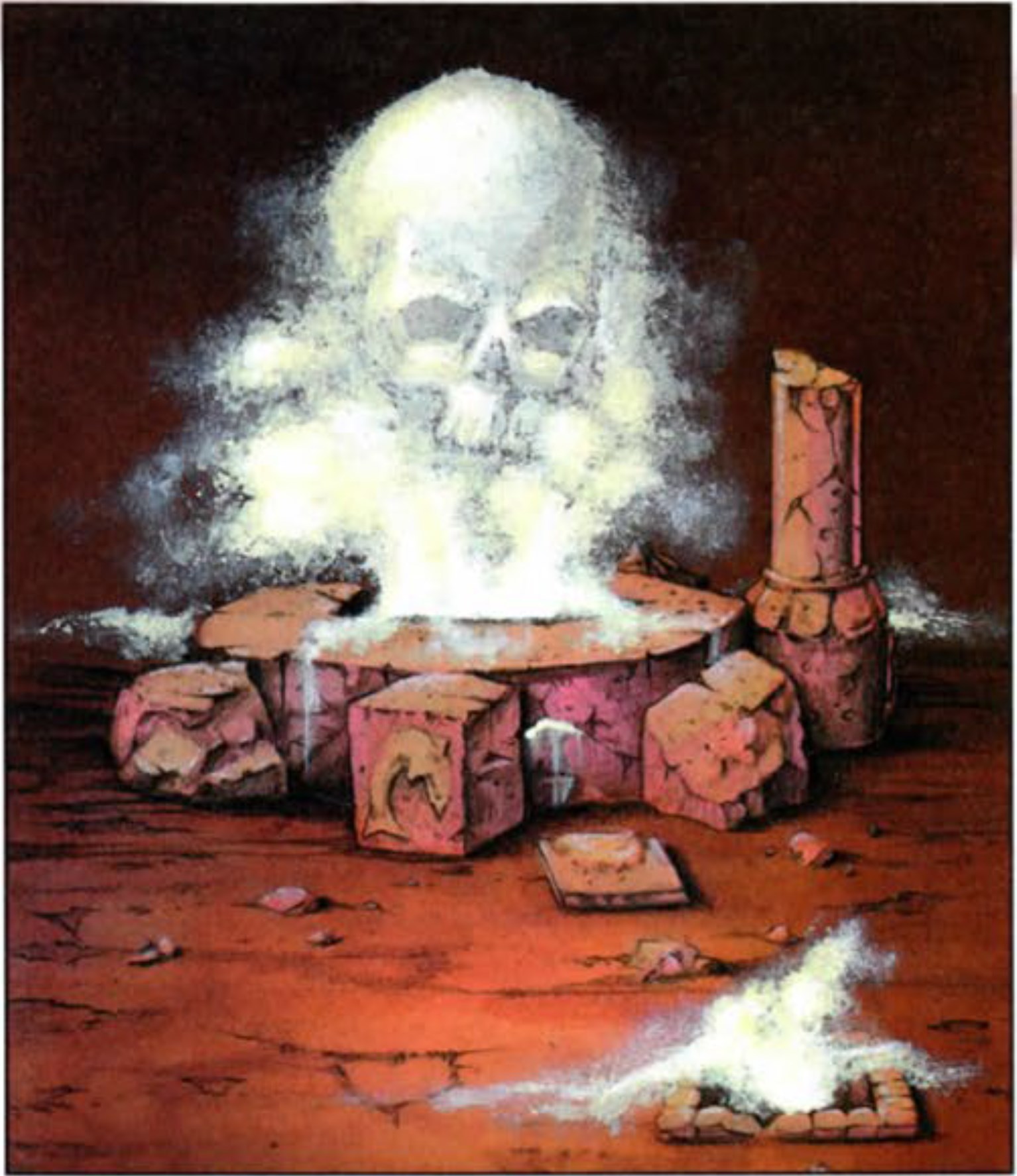 Fortunately, the whispers and wails did not affect anyone adversely and the party made relatively short work of the fearsome Vestige. Although it did get a few hits on Brie, partially dissolving her flesh on each hit. 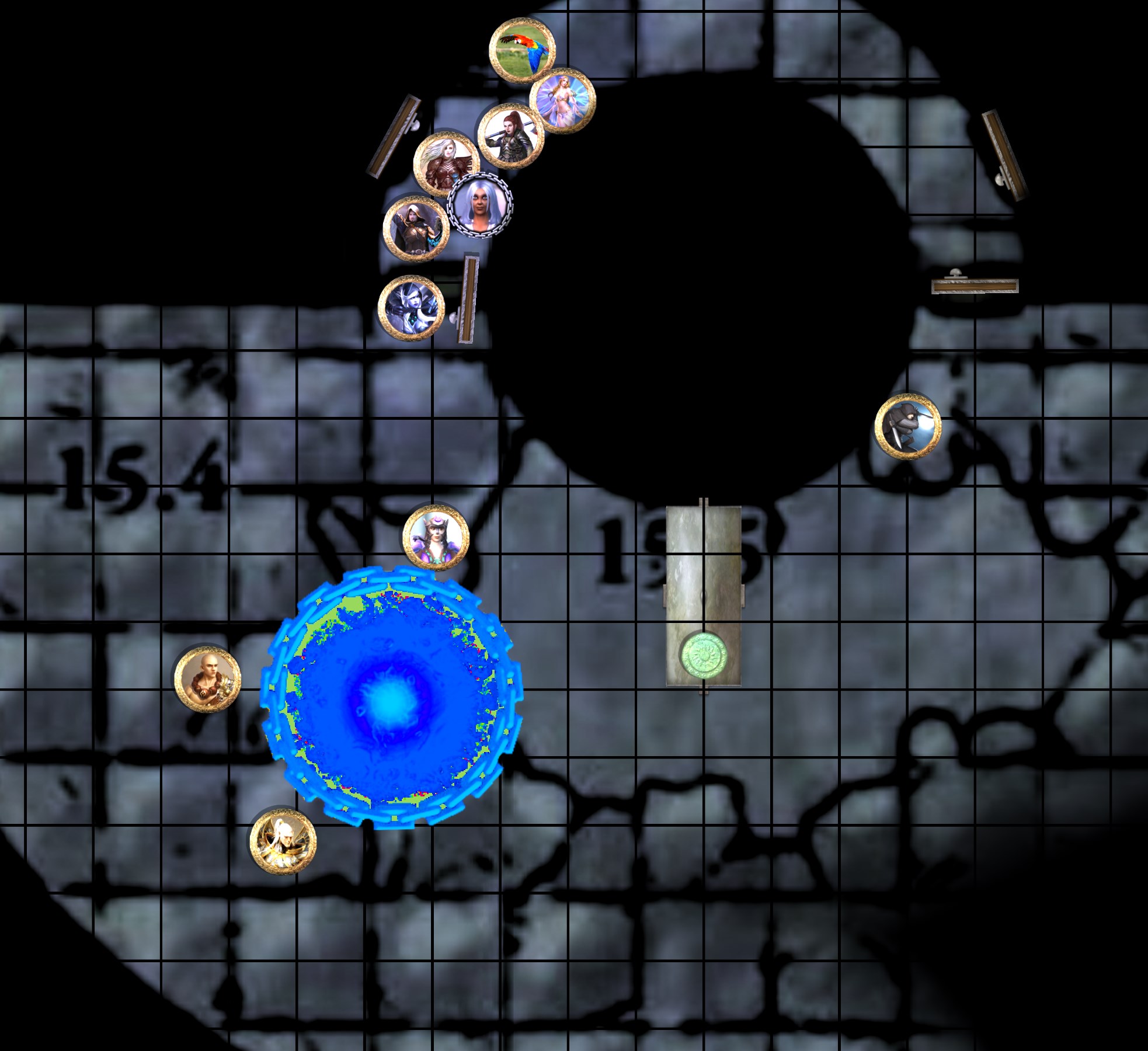 At this point, the party turned its attentions to the platform.

This platform of stone jutted out over the black abyss below, attached to the tower’s central support column only on its northern end. The extensive edges of the shattered chamber above are picked out by flickering light, but below the jagged edge there is only chill darkness. The platform is traced with various decorative inlays of red stone, surrounding a 3-foot-tall stone dais. Securely fastened to the stone dais is an hourglass filled with blue sand. A message is engraved into the stone next to the hourglass in the same red stone a decorates the platform itself.

On closer inspection by Quintus, he could read the message, “When the sands run out, bring the glass-about.”

Quintus used a spell to create a much larger and safe platform so, everyone in the party could join him. 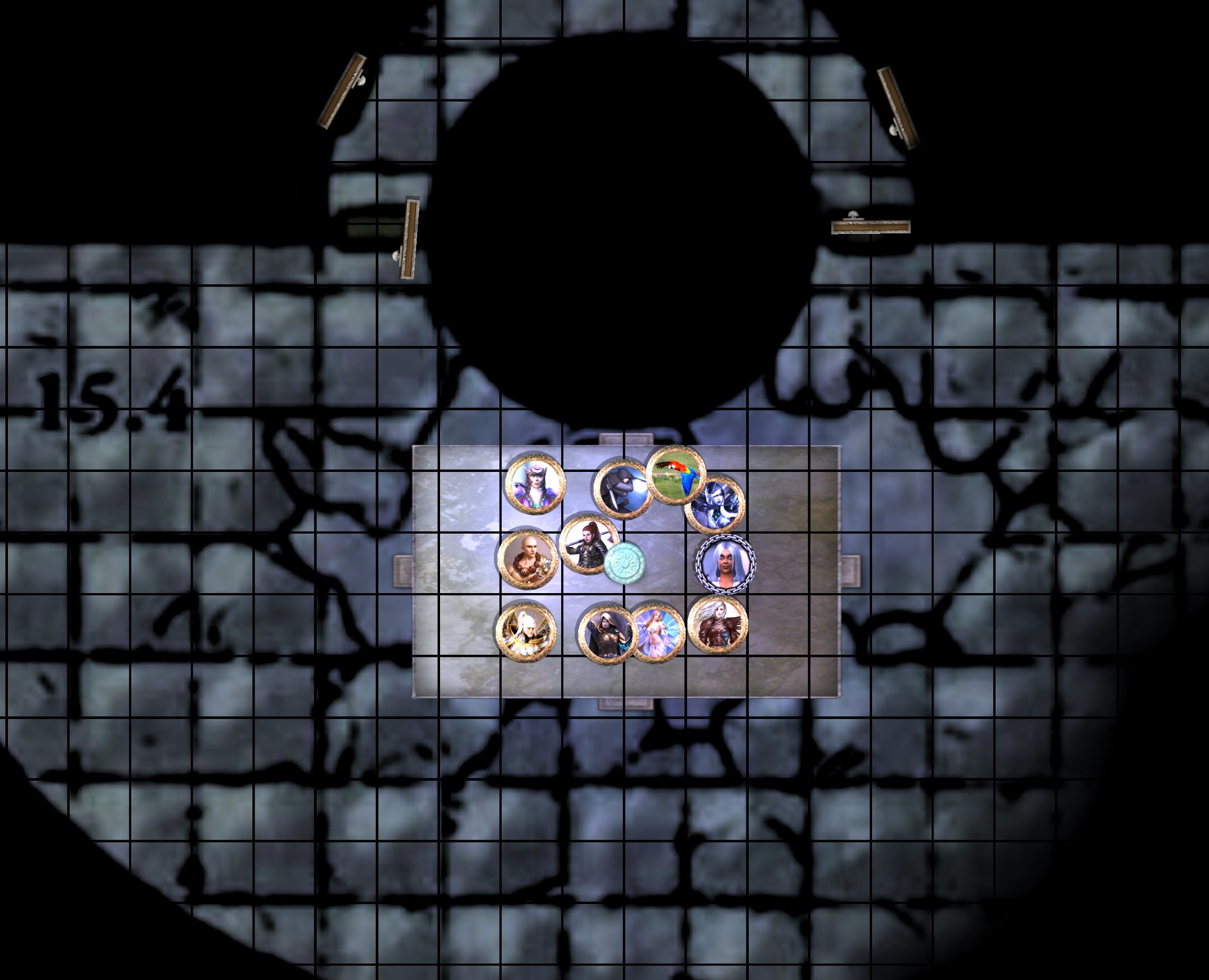 Quintus reached out and turned the hourglass and the blue sand began to pour through from top to bottom. It looked like it would take and hour for it to complete. After an hour of waiting, Quintus flipped the hour glass the other way and once again the sand poured from top to bottom. However, you felt an inaudible CLICK . You believed that this was the final puzzle and returned to the entrance to Tower 16. 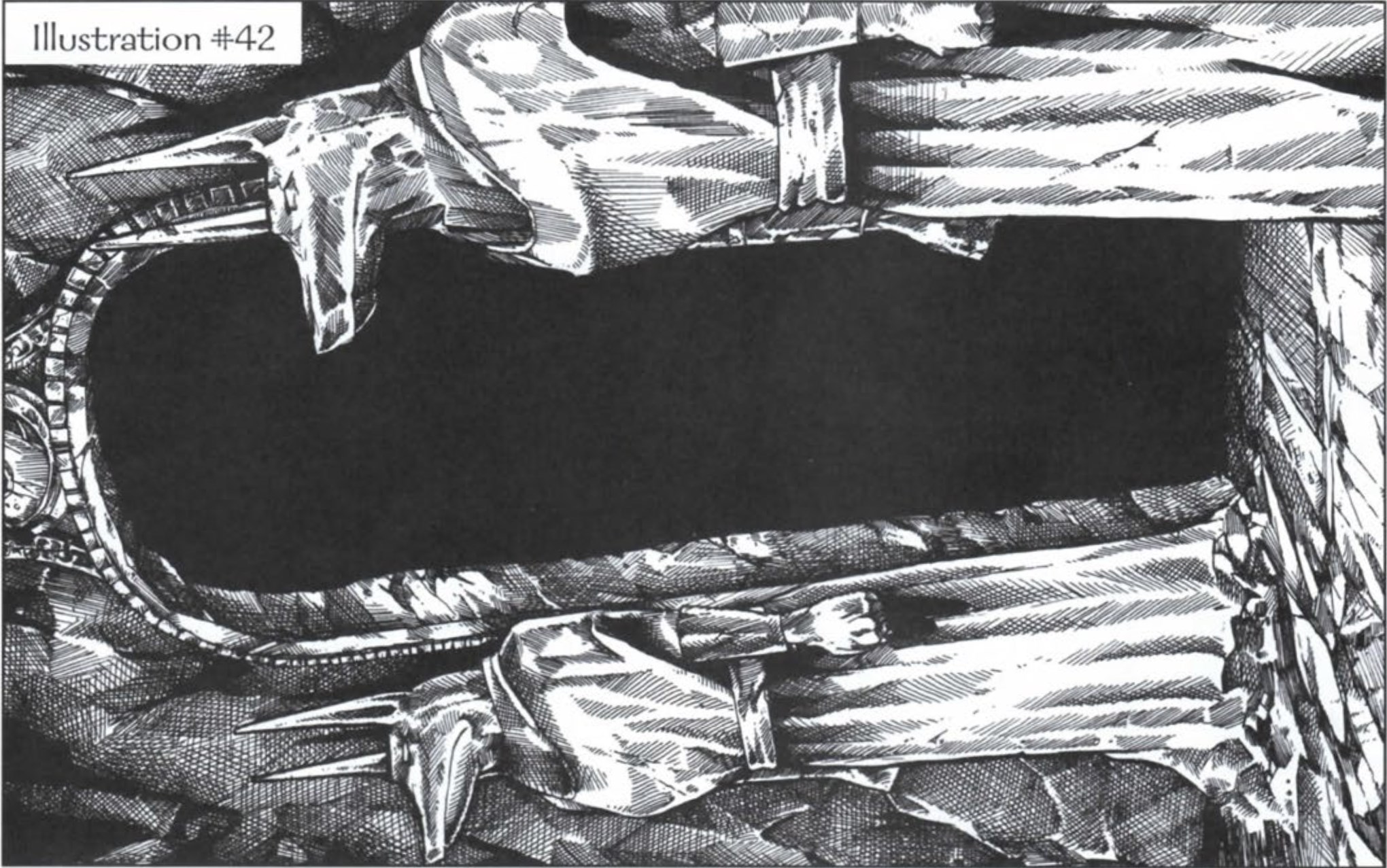 Once again you stand at the entrance to the Icy tower. The landing allows entry into a 20-foot-by-20-foot horizontal shaft bored directly into the ice of the spire. To either side of the ice tunnel stand what appear to be crude ice sculptures of jackal headed humanoids in robes. Centered over the top of the passage is a large eye carved in bas-relief. Only complete and utter darkness is discernible from within this ominous passage. 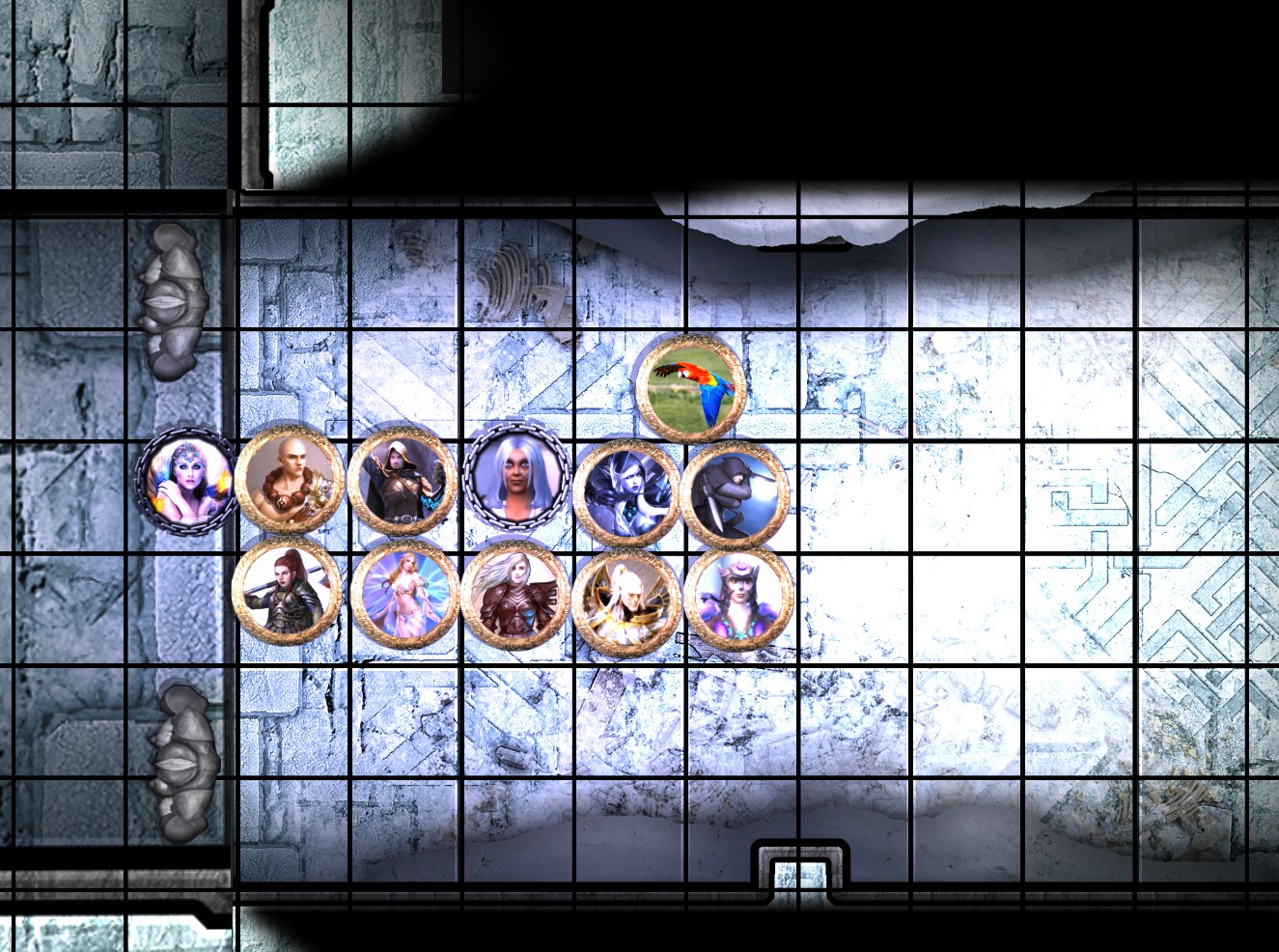 You entered the opening. The corridor presses in on you like an icy sheath. Suddenly revealed by your light source are dim shapes caught within the translucent walls, floor, and even ceiling. As you move closer, the shapes resolve to the point of recognizability: humanoid forms are caught in the ice in a variety of orientations and contorted positions, like insects trapped in amber. 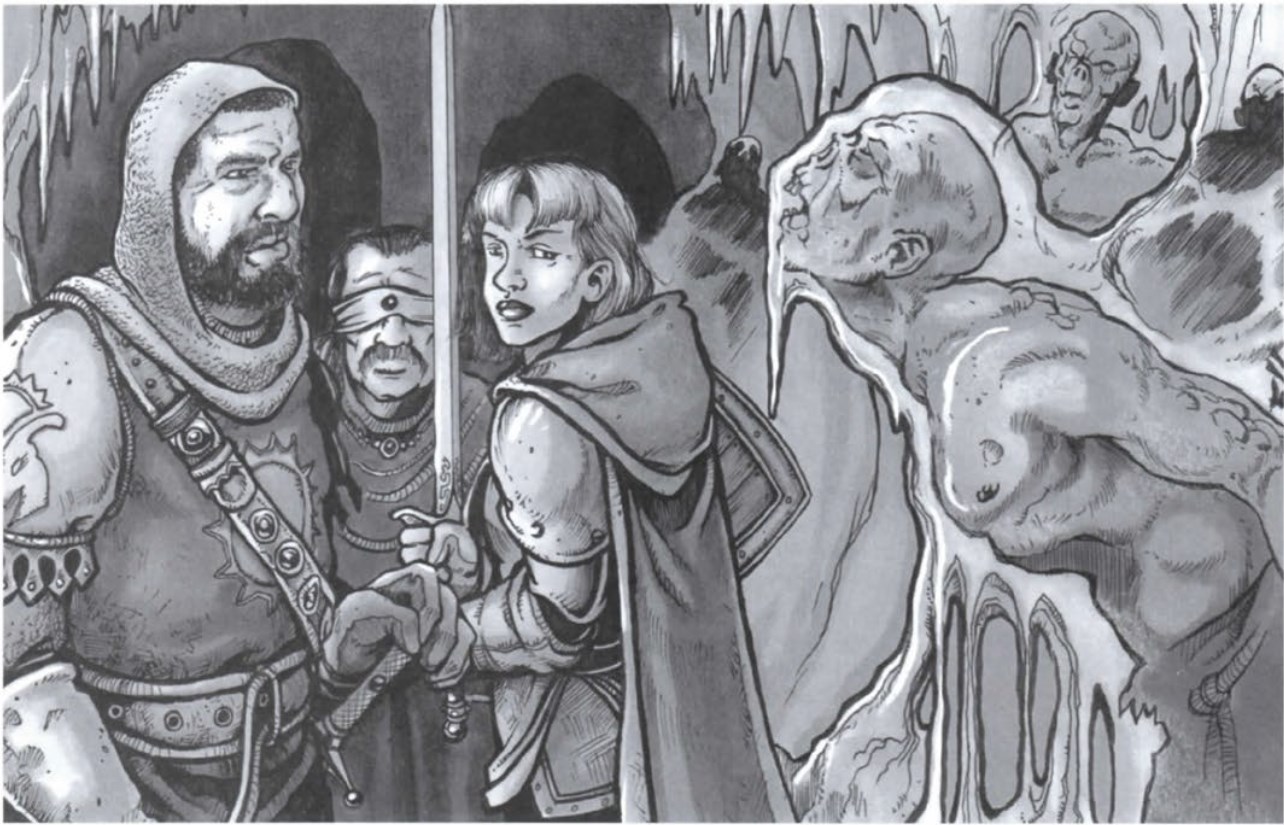 At this point several party members felt the frozen winter wights begin to drain their life force, sucking away a few hit points. Brie, thinking quickly, began to sprint down the hallway and quickly discovered a pit trap. Luckily, she managed to grab the edge of the pit. With Winter’s help, Brie climbed safely up to the corridor. Meanwhile the rest of the party began to move forward, avoiding the large pit.

At the end of the corridor you found that it terminated at a concave wall of slick ice. Bored into the center of the wall was a 4-foot -diameter shaft leading down at a 45-degree angle into the darkness. Carved in bas-relief around the circular hole was a clutch of writhing snakes. The serpents were entwined in a many-segmented circle. The eyes of the translucent snakes seem to gleam with a cold, blue light.

Haldir cast a fireball to destroy the snakes. 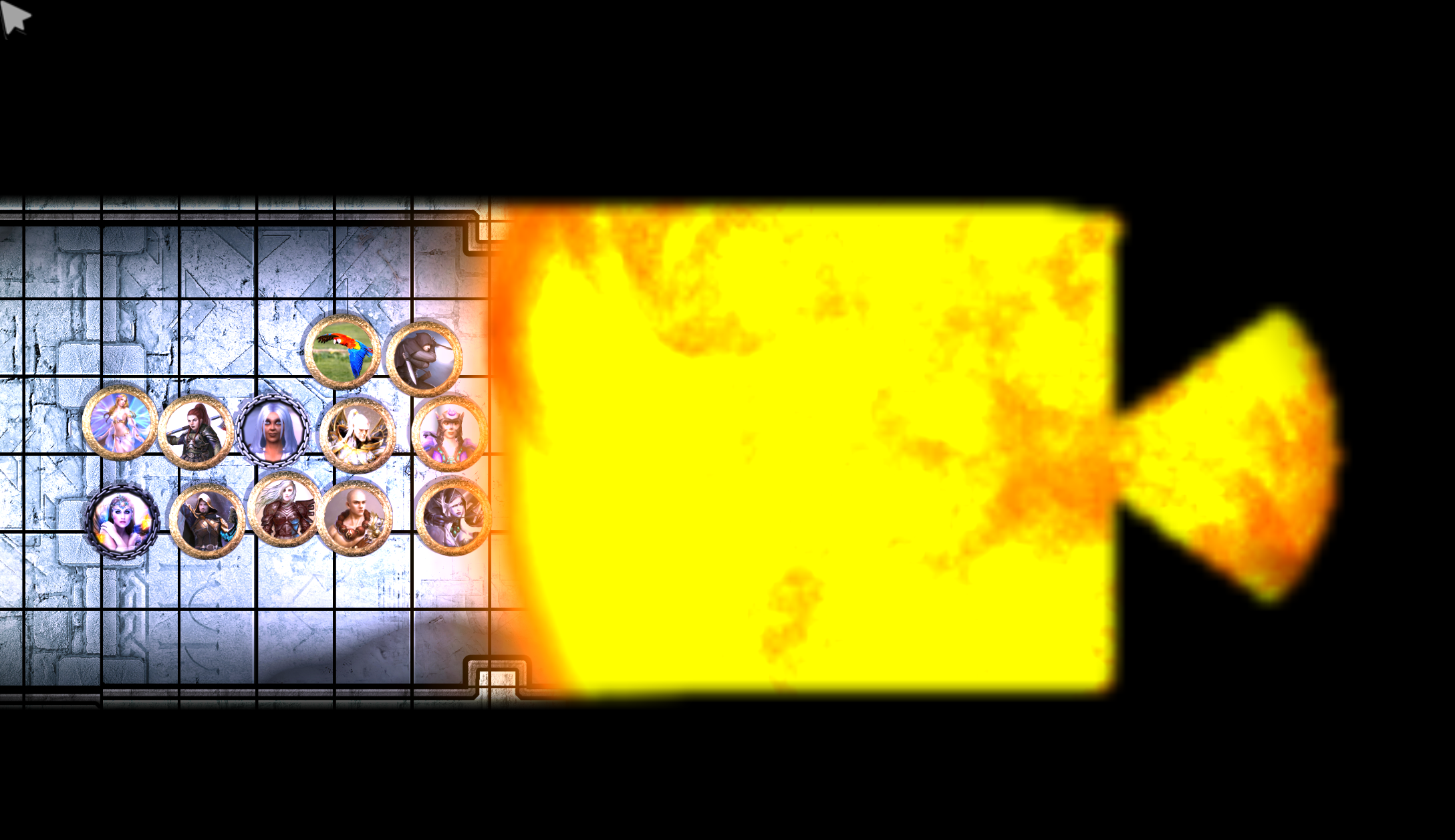 This was successful. However, the true trap was revealed when a 60 foot long length of the ceiling collapsed trapping a few party members. Quintus cast an Otiluke’s Resilient Sphere and protected himself and Brie.

Haldir, after freeing himself, summoned fire elemental which began to work it’s way through the collapsed tunnel.

Eventually, everyone was freed and you examined the opening at the end of the corridor

After some discussion, Brie jumped in the hole and, with the help of a levitation spell, began a controlled slide down the chute.

The slide empties you out onto a platform that overhangs a vast pit of roiling black vapor. The platform is slick, very narrow, and has no railings ‘or projections to’ grab as you skid across and toward the yawning abyss beyond. 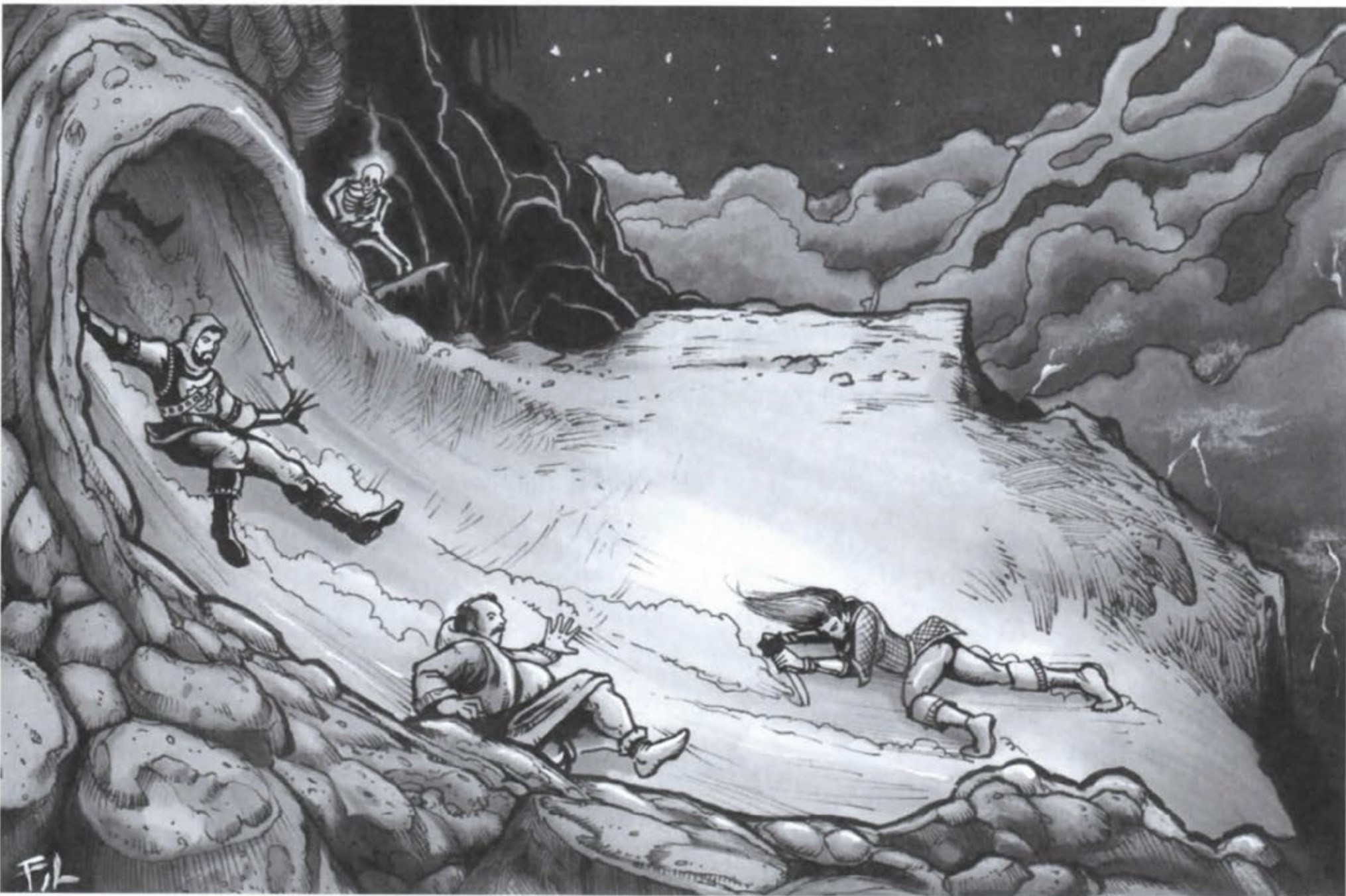 Fortunately, Quintus loaned Brie the immovable rod and Brie activated it to stop her slide. She also grabbed her brother, Safwin the Bold, who next came hurtling out the opening.

At this point, the Winter Wight that was lying in wait ambushed the siblings. 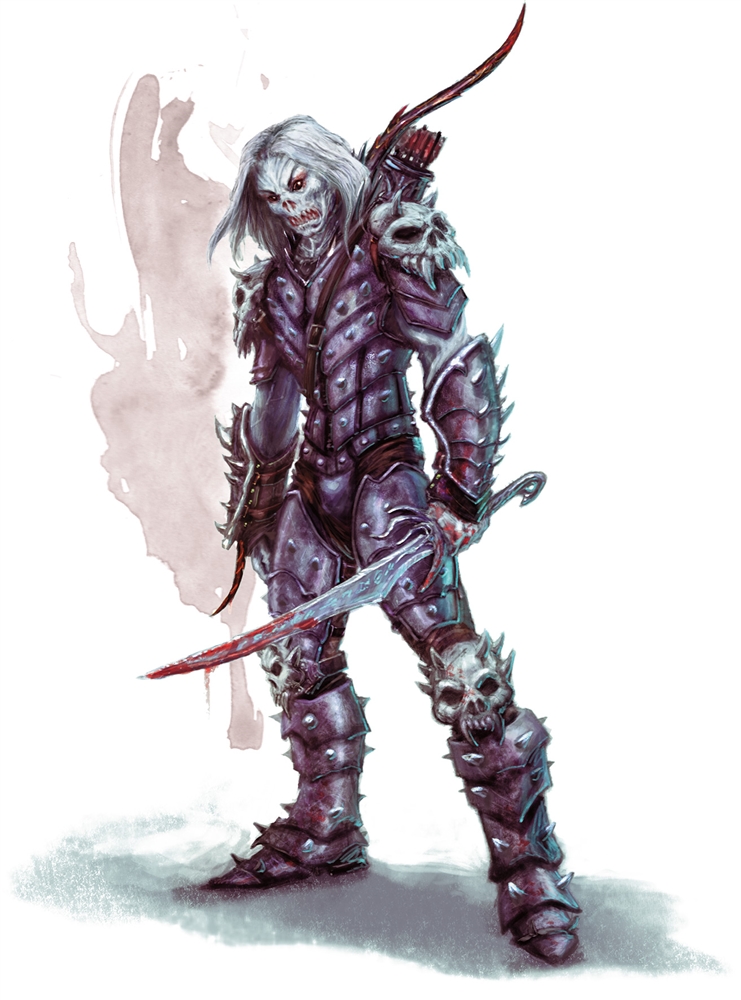 Brie and Safwin made short work of it. The rest of the party safely slid down to the lower platform.

You found yourselves in a large chamber. The floor of which was filled with roiling black vapor. You could see:

A 30-foot-by-30-foot landing juts over the roiling black mist from the vast plane of ice constituting the eastern wall of this huge chamber. Flush with the ice face of the wall are a set of glowing red bars sealing off a 20-foot-square opening. Behind these bars are a horizontal set of green glowing bars, and beyond these can be made out a final set of coldly glowing blue bars, running vertically. In spite of all this light, shadows pool thickly in the void beyond.

Above the bars, a message has been inscribed into the ice. Suddenly, you spy movement as the bars retract and a creature of two wings, a horse-like back, and two black tentacles can be seen in an icy chamber beyond the platform.

Using various means of flying and levitation, you traversed the chamber above the eerie mists and arrived on the landing. The message reads:

When the bars fall away,
The flyer stands revealed.
It can bring you my way,
By the route once concealed.”

Ahead, in a chamber you could see a creature immobilized within. There were golden manacles bonded to the far wall hold the creature in stasis.

Haldir used the silver key recovered from the Brine dragon’s lair to open the manacles and free the beast. Now released, it carefully moved out onto the platform and stretched its wings like some grotesque butterfly emerging from its chrysalis. It then squatted down in a manner suggestive of taking on riders.

After everyone mounted up, it lifted off. You watched as poor Sebastion, the green lizard, remained, abandoned on the platform. You could hear it exclaiming, "Consternation, mortification, irritation, desertion,… 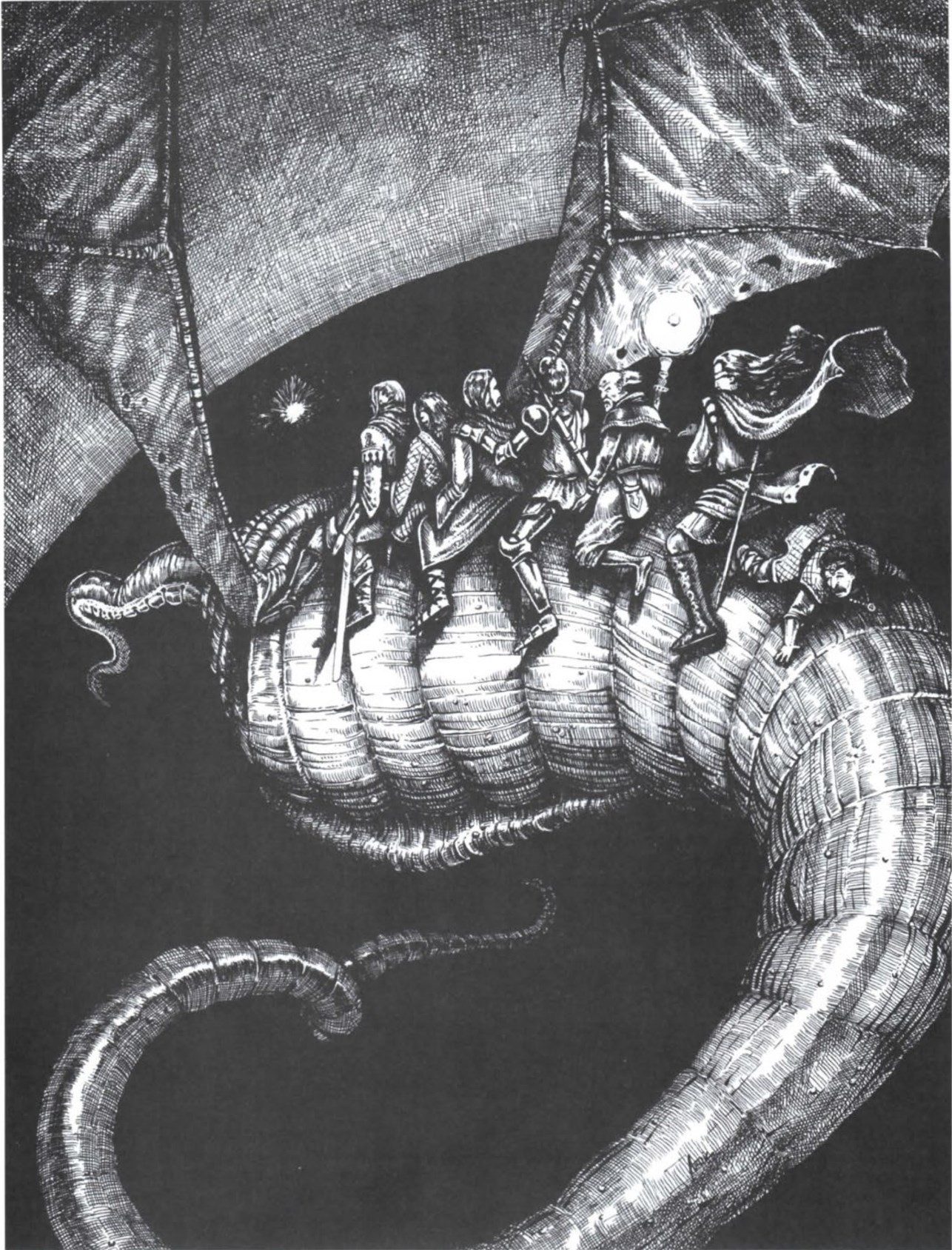 The wings of the phantom buffet the air with insane strength, bearing you high above the languidly boiling deck of cloudlike black vapor. The flyer pauses for a moment, then folds its wings, diving straight into the center of the Last Chasm! You plunge through opaque mists that whip past your face with an icy chill, soaking you with freezing condensation… but thankfully nothing worse.

For a timeless moment you seem suspended in a void of shadow, darkness and mists. Your extremities are beginning to lose feeling, and you seem to be having trouble remembering your own names, when suddenly the phantom flyer breaks through some interstice. Your faculties rally, and you perceive a vast wall of utter and complete blackness, stretching up, down, left, and right to the utmost limits of your vision; its scale is truly staggering. The flyer seems to be beating towards a barely visible sparkle of light, a solitary imperfection in an otherwise perfect void.

At this point, the camera zoomed out and we concluded the episode. We will pick up on Episode 79 as the phantom flyer arrives.

You can see a pale stone face of fiendish expression and massive dimension that stands out
from the immense black wall like a piece of flotsam on a vertical sea of frozen oil.

A stone ledge protrudes from the lower portion of the mouth like a thick tongue. Your eerie beast of burden lights upon the platform and bends low, allowing you to dismount. At the rim of the ledge an iron post holds aloft a rusted lantern from which gleams an emerald light. The mouth overhangs a closed door of rusted metal; a pull ring hangs on the portal’s right side. Upon the door the following words are inscribed:

Penultimate Perceptions Entrance to The Fortress of Conclusion