As the camera zoom in we rejoined the Legion of Hope. The New Jersey Devils teleported away after recovering the Crown and Scepter from Fria.

Winter (or was it Marg?) rushed up to Fria and attempted to revivify her. Alas, that magic is not enough to revive someone who is missing her head.

Marg took a deep breath and cleared her mind. She began to pray to Ilmater. After establishing a familiar divine link to her deity each party member added their entreaty to call Fria’s soul back to her body. Marg then touched the Rod of Resurrection to Fria’s body.

Fria was walking in a verdant forest when she heard the call. Game was plentiful. The forest and meadows were beautiful. She felt at peace. But, here was the call, from her friends, and she realized there was still unfinished business. It just wasn’t time to give up on the mortal world. And she chose to return.

The party healed up and spent some time resting and identifying the loot from the brine dragon lair.

Paying attention to the next clue from Acererak’s rhyme,

“Beneath webs of glowing emerald
Hangs a riddle-box, ripe to be solved.”

With the help of a find the path spell, the party made their way to the entrance of yet another tower. 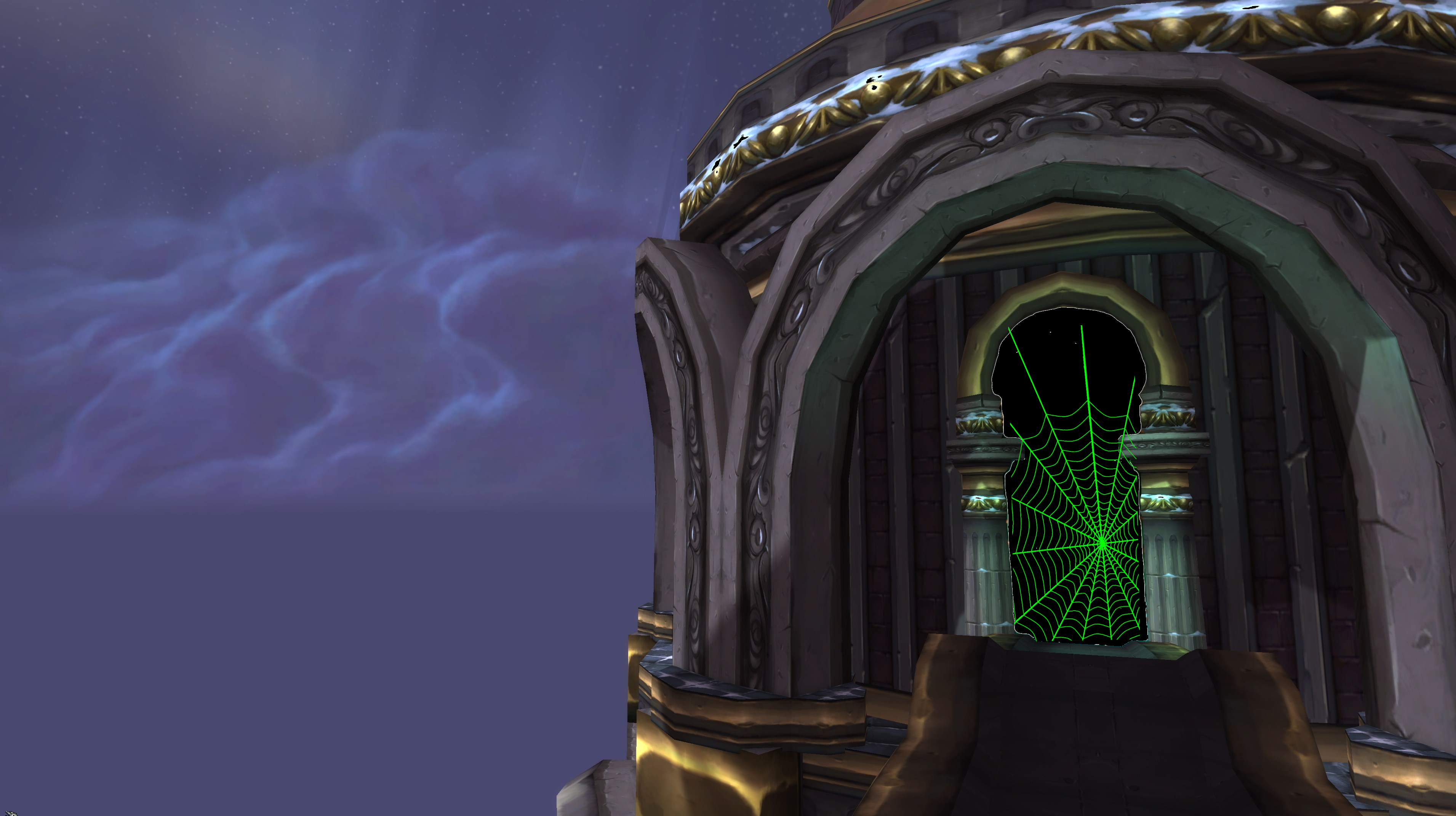 The bridge led to an opening on the eastern side of a silent spire. You could see an arch that allowed entry into a hollow tower. However, you see a greenish fluorescence shinng up from below, highlighting the edges of the arch with a sickly hue.

You could see a mass of green-glowing webbing stretching throughout the entire diameter of the tower, starting ten feet below the entrance.

On closer inspection, you see Gossamer strands of gleaming emerald weave impossibly delicate designs against the dark. Space is tight between the strands, the largest openings the mass are no more than 5 feet wide. There is nowhere to stand except upon the glittering web-lines themselves. The pale light of the webs seems to chill rather than warm; heat is only a fading memory. 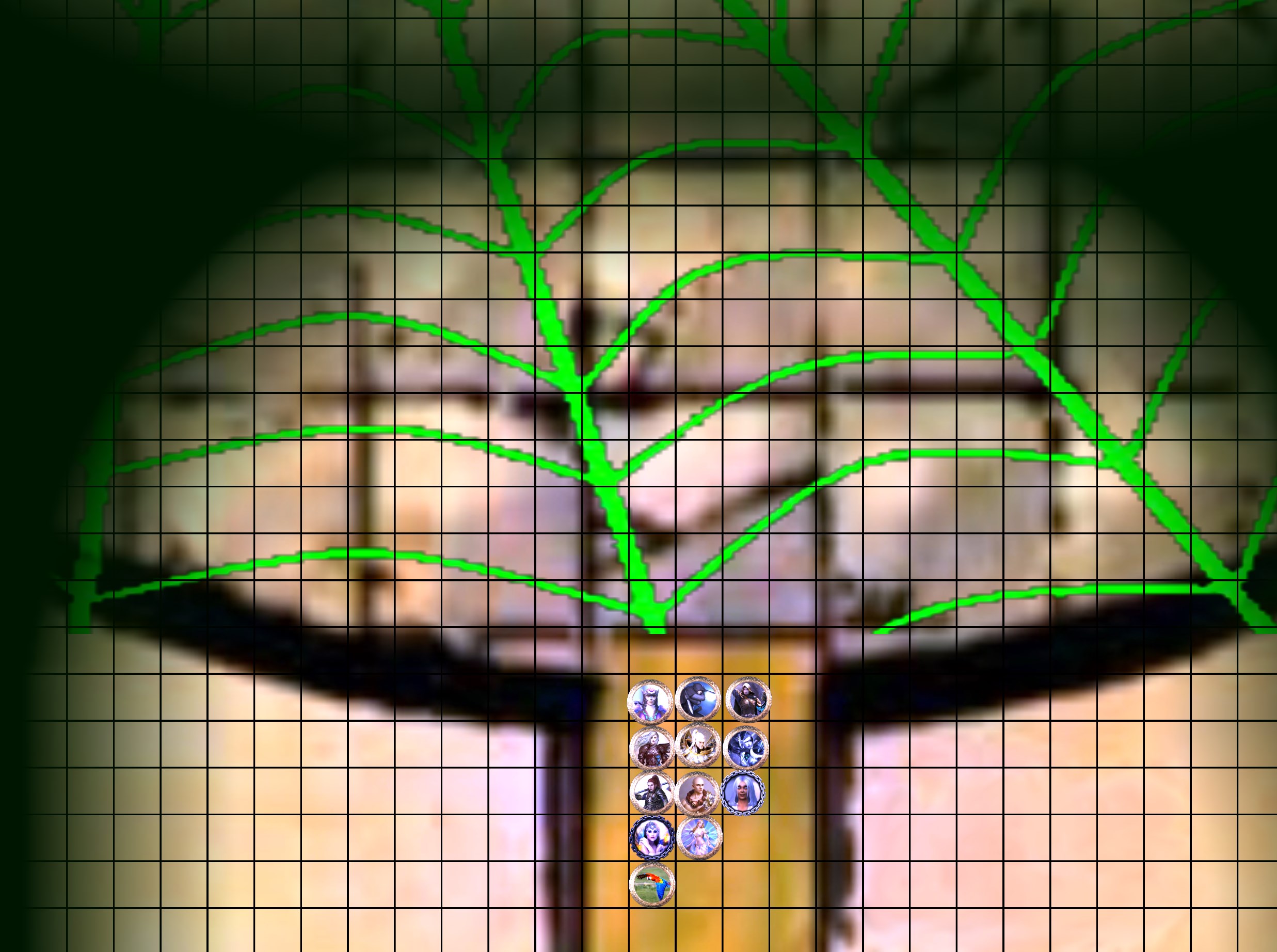 The party cautiously made a few attempts at entering the tower. Soon there was a audience of the many legged variety. 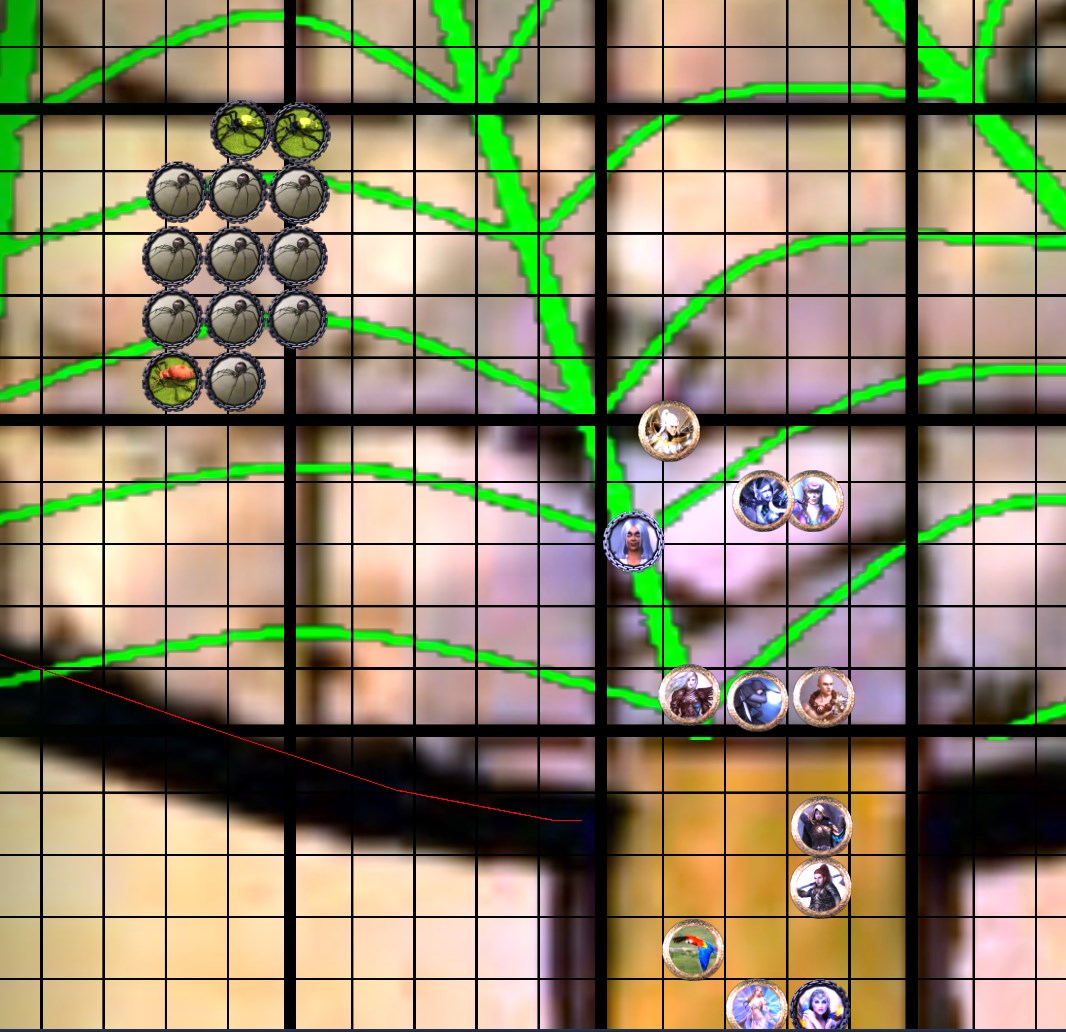 Using the Armani-Versace solution, the Quintus and Haldir went to work on the webs with fireballs, effectively burning away larges swaths of the webs and spiders. 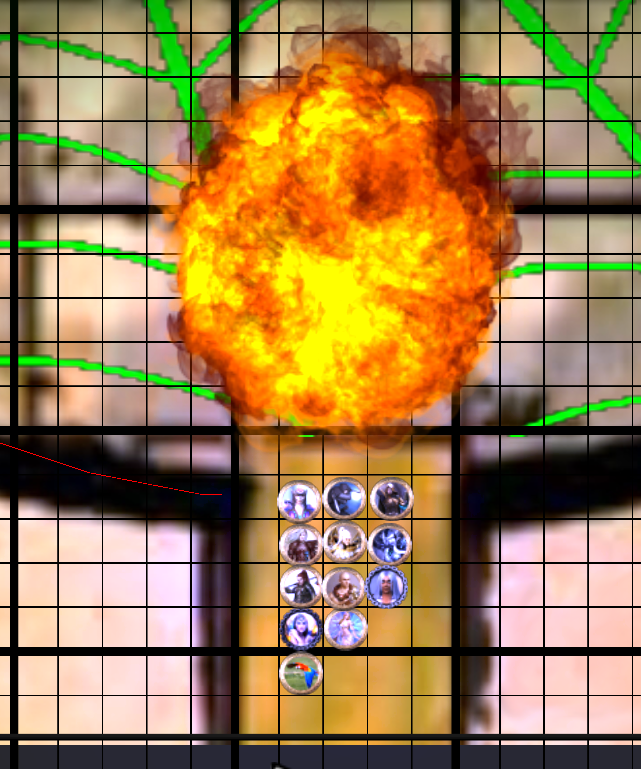 The remaining spiders were quickly dealt with and more fire balls blew through the bottom of the webbed expanse. This allowed Safwin enough space to fly down through the opening. In the distance he noticed a large square box, about ten feet per side, suspended beneath the web canopy.

As he approached it Safwin could see a ceiling consisting of an expansive mass of glowing webbing. There was a thick braid of luminescent webbing hanging many feet down from the central mass, suspending a black cube. There were strange designs etched in red, decorating the surface of the box. 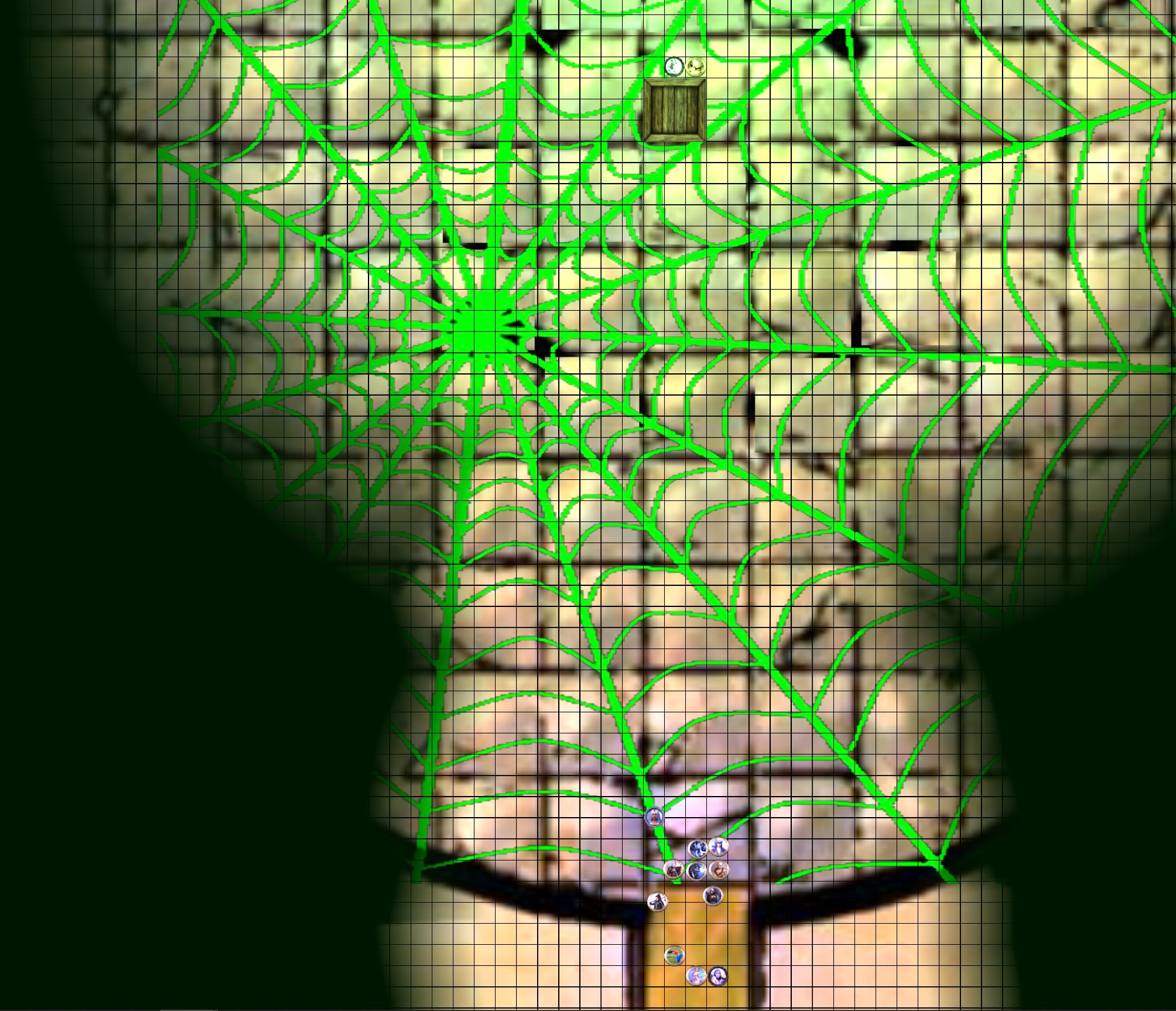 As soon as Safwin landed on the box, the Winter Wight, concealed on the far side of the box, scuttled around it and attacked.

The rest of the party began to fly and levitate after Safwin. But, it was quite a distance to cover. 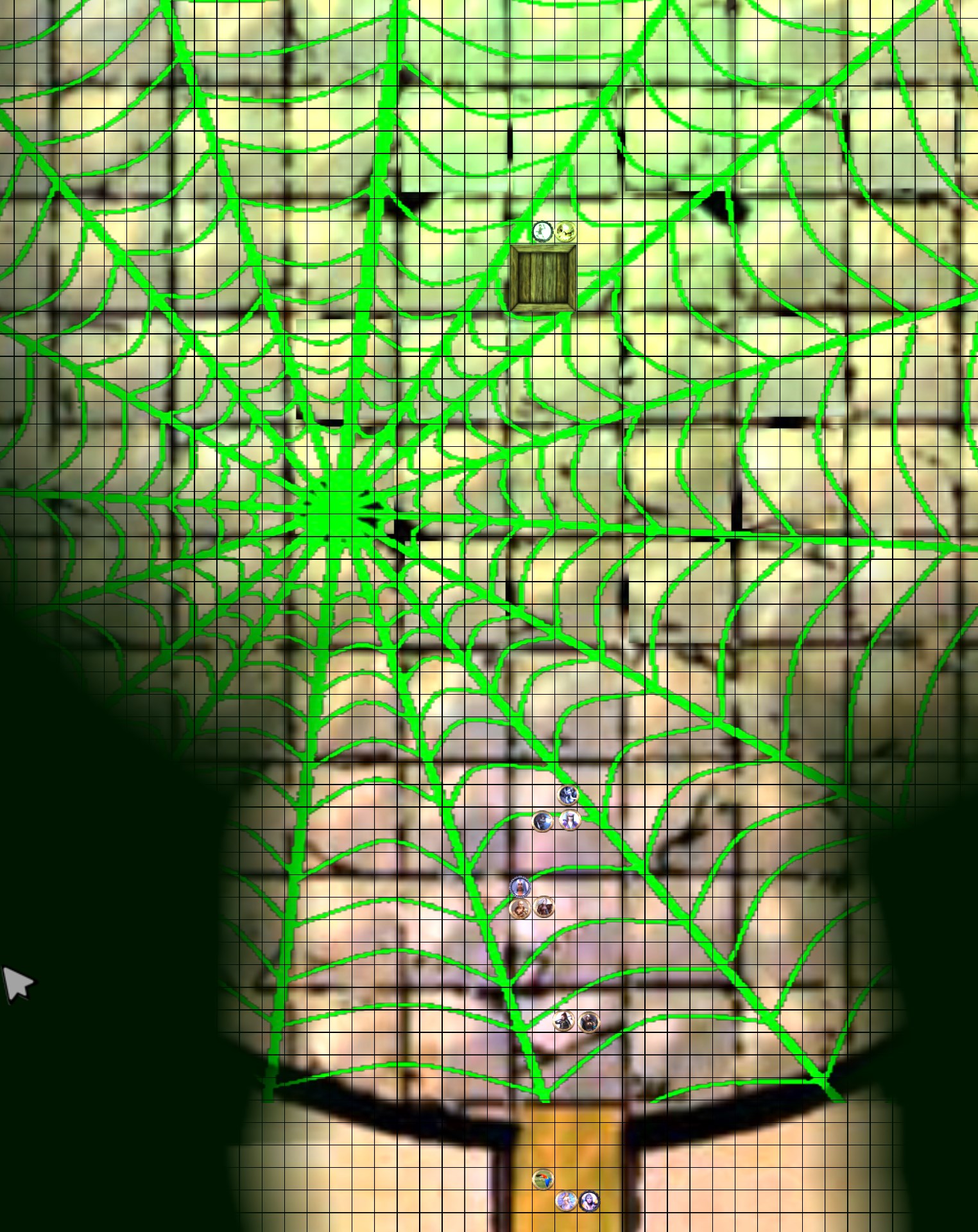 Eventually, most of the party began to arrive and proceeded to beat up the Winter Wight. 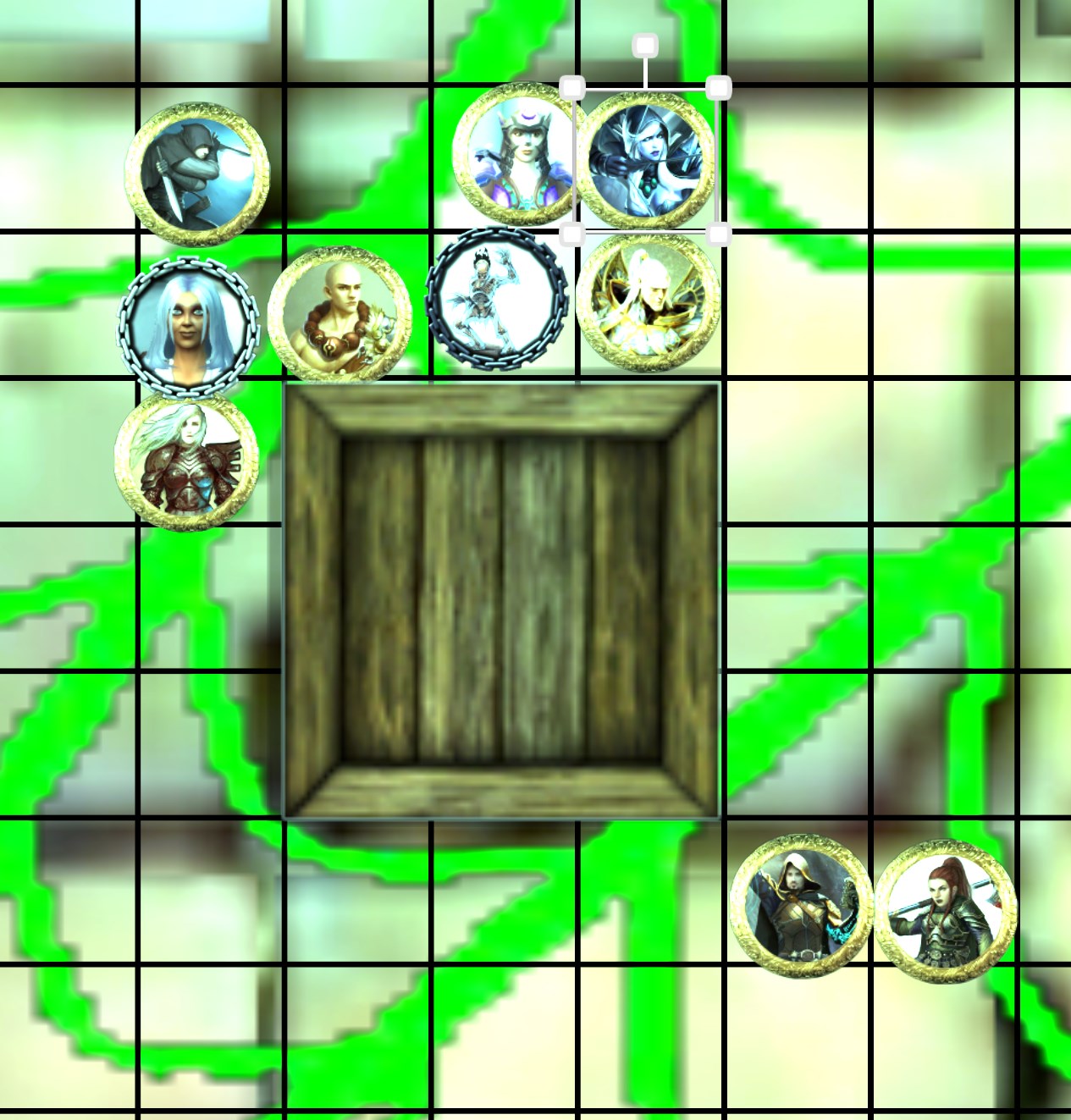 After the fight, you found something of interest on the bottom of the box. The underside of the cube had a riddle engraved in the ten by ten area. It was picked out in the same red stone that decorated the rest of the cube. Beneath the riddle were three plaques. Which you figured out, could be pressed.

The plaques depict
1) A mighty oak tree with many roots reaching down into loamy soil.
2) a cat with many hissing snake-headed tails.
3) a rope with one end frayed and partially unraveled.

The riddle was in common and could be easily read:

“Many tails have I,
or many a beginning.
If I fail people sigh;
wails mark their passing.”

After some discussion, you decided to press the plaque with the rope on it. When you did so, you heard a click. Nothing else happened. However, you have the strong feeling that somewhere in the city, something had become unlocked.

Just by happenstance, you noticed that the wight had been wearing a ring which remained on the cube’s top surface.

This turned out to be a ring of universal movement.

You returned to your safe room in Tower 2 and, as the camera zoomed out, studied the next part of Acererak’s riddle:

“The darkweaver endures the cold in her lair;
Grasp your fate with consumate care,”