Entrance to The Fortress of Conclusion

We rejoined the Legion of Hope just as the Phantom Flyer arrived at its destination.

There was an immediate battle that started upon arrival.

It turned out that Haldir had been subject to a Magic Jar spell. All Haldir could see was grey, featureless surroundings. He could sense nearby lifeforms and he gained some sense of how powerful each one was.

In the meantime, Brie, with her ability to detect evil, had noticed that Haldir was detecting evil. Brie also detected another smaller source of evil that was on the phantom flyer with the party.

Luckily Haldir was able to act first. As people began to disembark from the flyer, Haldir called upon his divine ability to produce Silver Fire. This immediately expelled the evil life force that was inhabiting his body. However, it also created an inter planar rift. A large demon noticed and began to come through the rift. GASP! 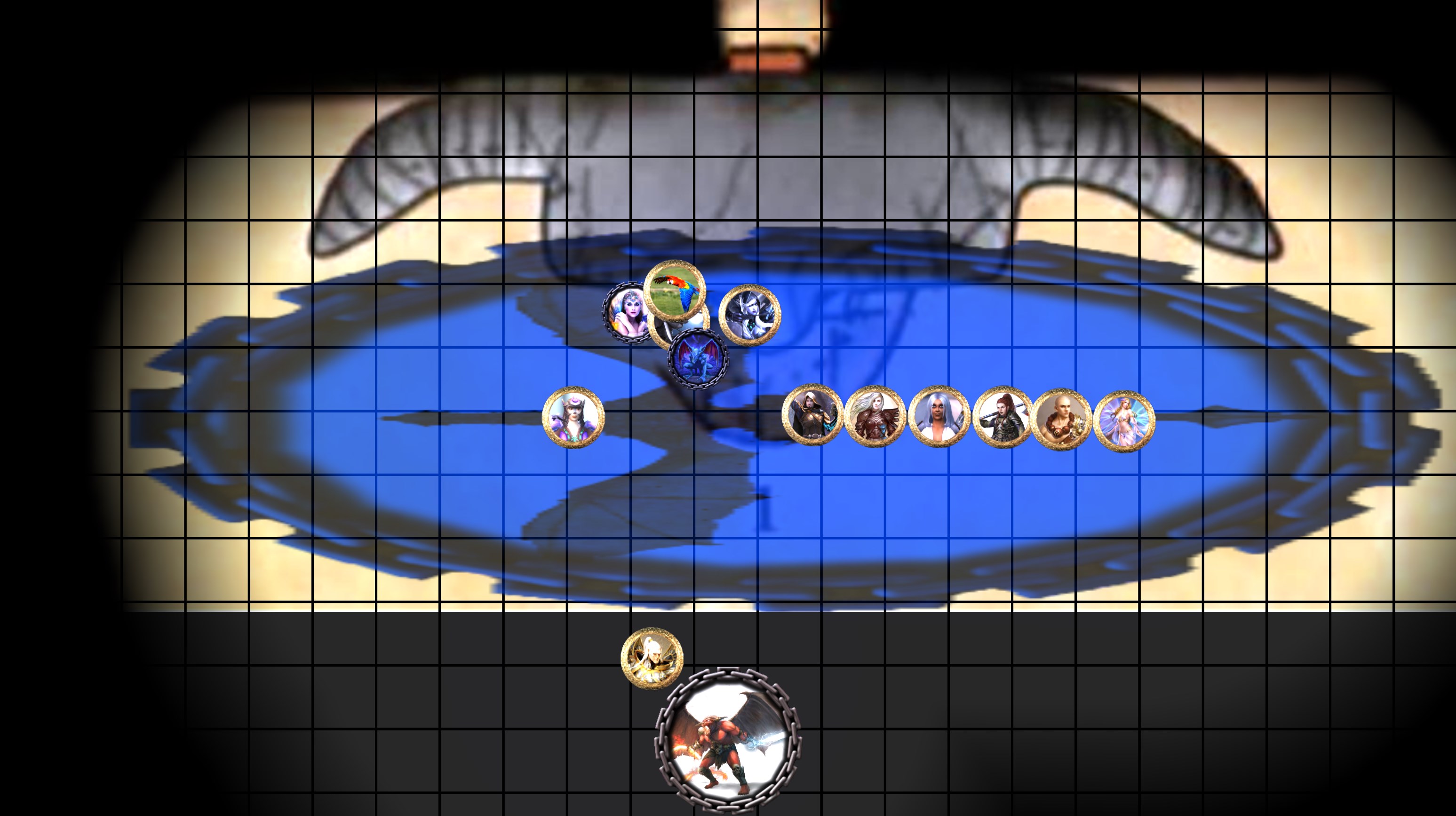 Safwin the Bold took flight and flew out to attack the foul demon. In the mean time, an imp tried to attack Quintus’s familiar, Sniper.

The party made short work of both demons. Brie was able to detect that the Amulet of the Void, worn by Haldir, was the source of the evil presence. After some discussion, you tossed it in the cloudy void and it disappeared into the negative energy plane.

Imagine a cut scene as the Amulet drifts endlessly through the negative energy plane. What is the ultimate fate of this being?

You gathered together on the small platform at the entrance to the Fortress. In front of you you could see

A pale stone face of fiendish expression and massive dimension stands out from the immense black wall like a piece of flotsam on a vertical sea of frozen oil. A stone ledge protrudes from the lower portion of the mouth like a thick tongue. At the rim of the ledge an iron post holds aloft a rusted lantern from which gleams an emerald light. The mouth overhangs a closed door of rusted metal; a pull ring hangs on the portal’s right side. Upon the door the following words are inscribed:

An image of an hour glass appeared over the phantom flyer that looked like it would take about a month for the sand to run out.

The party turned toward the door. The rusted iron door pulled open easily. It was unlocked and un-trapped. You stepped into a square chamber.

The interior is covered with a smooth plaster, upon which various scenes pictures, and glyphs have been painted. These paintings not only adorn the walls but also the floor and ceiling in a disorganized visual jumble: insectoid dragons fly through scarlet clouds while doing battle with immensely long tentacles that rise up out of a dark seascape below; worms whose size is measured in miles squirm across the countryside mindlessly laying waste to wilderness and civilization alike; a dozen man-sized insects flee a horde of thousands of wriggling, swarming inch-tall humans. These and many other disquieting images blend in, one to the next, so that it is sometimes difficult to determine the boundaries of each particular scene. To one side a single open exit also serves as the gaping maw of a rampaging worm. 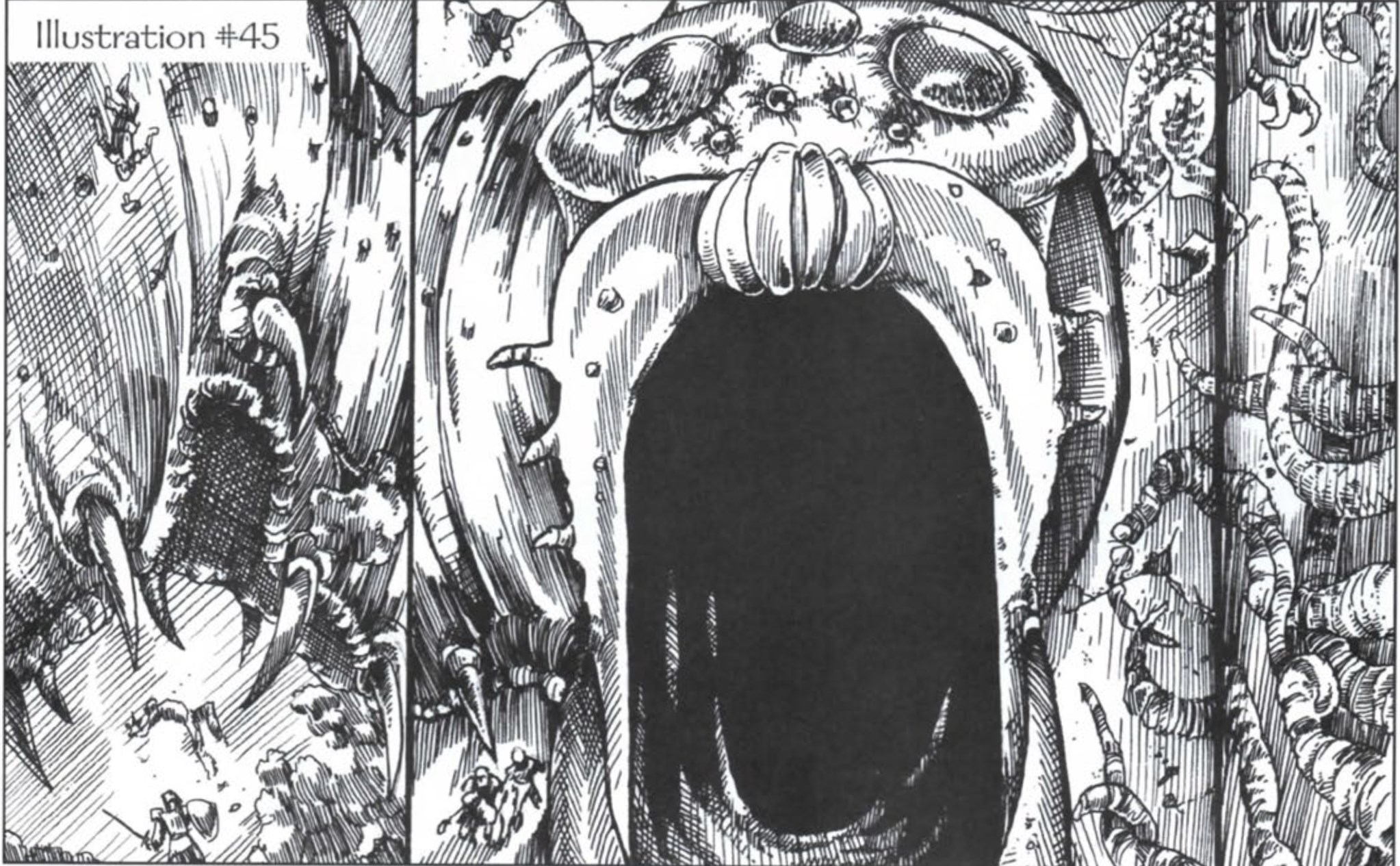 You moved on to the next room. You entered a small square chamber with unadorned walls. A metal hook has been affixed to the ceiling here. A human shape dangles from the hook on a leather strap. The figure wears only the tattered remnants of a robe, and so it is possible to see that its arms have been sewn to its sides and that its legs have been stitched together and, most disquieting of all, the same bulky black thread has so been used to sew the man’s eyes closed and lips shut. A low, inarticulate groan of pain issues from the dangling figure.

As the party approached the figure, Winter recognized the hated figure of Desatysso, the former employer of her old adventuring party and the reason for her ill fated visit to the original Tomb of Horrors.

Those party members with a high enough wisdom could hear Desatysso projecting his thoughts. He says in hoarse mental words, “Release me from this horrible bondage, I beg you: kill me! I’ve lost all track of time, but it seems an eternity since I, Desatysso, entered this most accursed of places!”

After you promised to release him, Desatysso related what had happened to him here, in the fortress.

When he arrived to the fortress on the phantom flyer the ledge was not deserted; instead there he met a gaunt figure in a concealing cloak tending to the lamp. The figure watched Desatysso dismount from beneath its hood and stood mute for a few seconds after the mage first hailed it. It then said, ‘’Only one? I’ve no use for just one. The investiture of my consciousness into the Void requires more; I’ll have to wait a bit longer, I see. Now, then, what’s to be done with you, eh?" The figure then raised skeletal arms and began to cast a spell, but Desatysso was quicker. To his surprise, a single lightning bolt was enough to demolish the creature; it seemed as if it were nothing more then a simple skeleton.

After this, Desatysso’s recollection of events grows sketchy. He vaguely remembers entering the Fortress through the door, and remembers further navigating through many rooms and facing several dangers, although he can’t quite recall all the details. He does recall a pit filled with animated bones, an entity of abyssal power kept bound and controlled, a dark laboratory dedicated to the production of foul wights encased in ice, and lethal traps everywhere. The last thing Desatysso remembers is coming to a huge crystal sphere with many facets. Phantom faces crying in anguish were visible within many of the facets, but before the mage could investigate further a darkness came upon him and he remembers no more.

At this point Winter mercifully dispatched the suffering mage. Unfortunately, this triggered a horrible trap, the stitches throughout Desatysso’s body animated and began moving to Winter. Fortunately, Winter made her savings throw and was not stitched and hung on the hook. 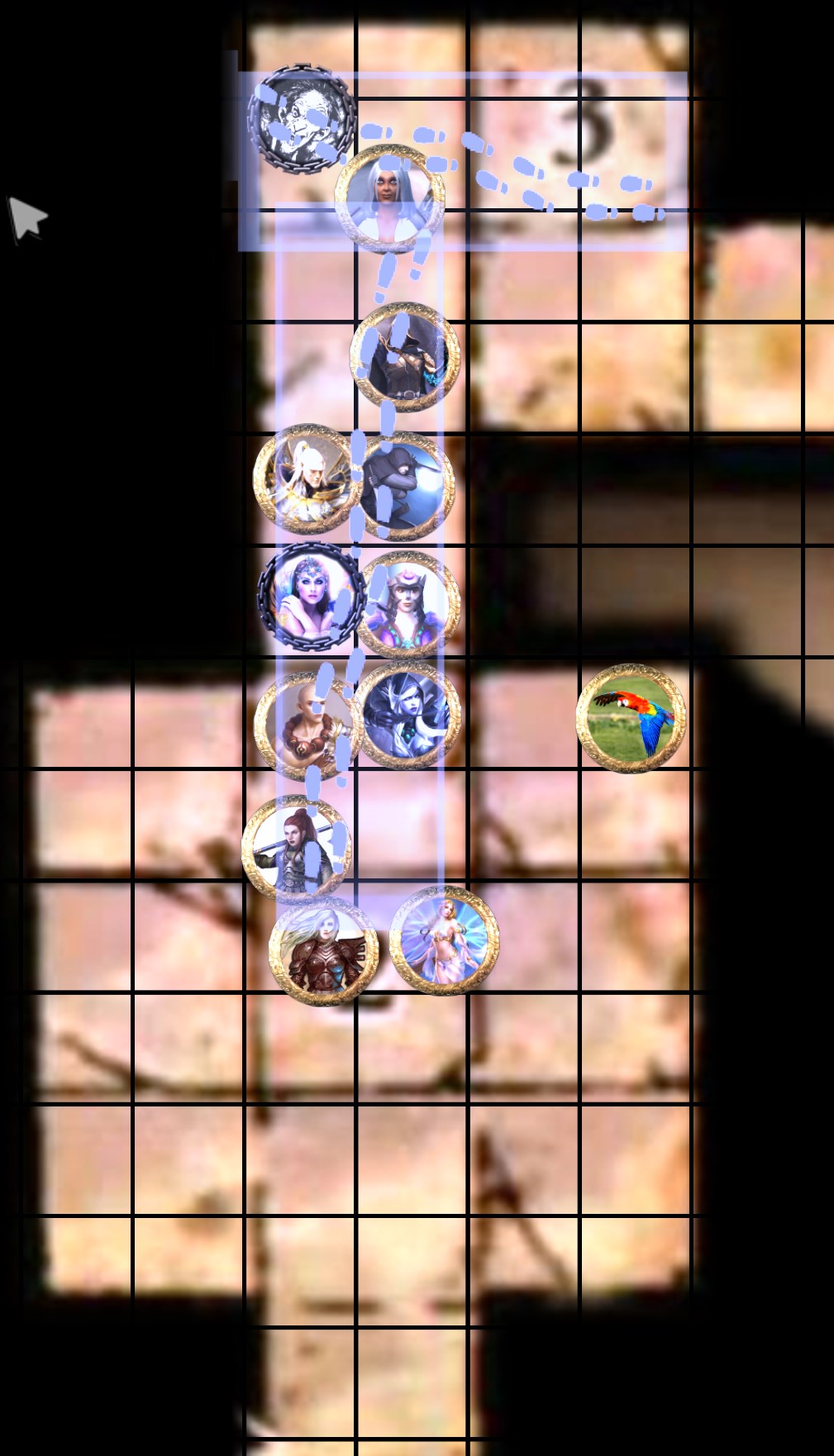 You followed the footsteps north (technically compass directions aren’t really applicable in this dungeon) until you came to a chamber on the right.

Wisps and tatters of vapor visible in the 20 ft. wide the corridor seems to give out to a larger area. It is impossible to determine the size of this chamber because it is filled with a a silvery mist shot through with delicate streamers of ebony. The mists slowly writhe and rotate, glowing internally with a sliver radiance. The sound of a periodic whimper, groan, and even a shrill but faint scream can be heard emanating from within the shrouding mists.

In the center of the chamber, you discovered a dretch, a type of low level demon, chained to the floor. 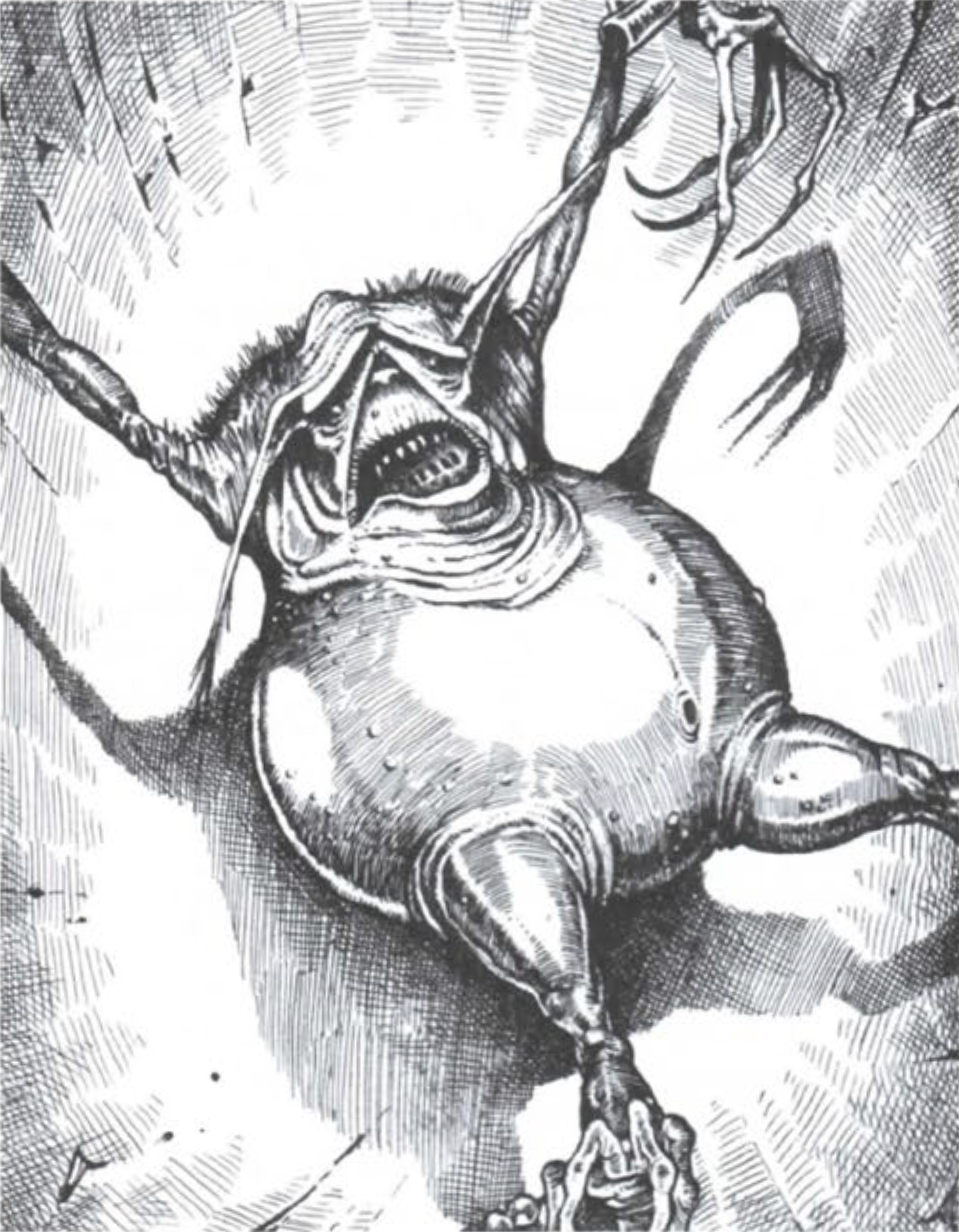 The footsteps lead to a point in the room near the wall where they ended. As you were investigating, you were attacked by the Overseer. 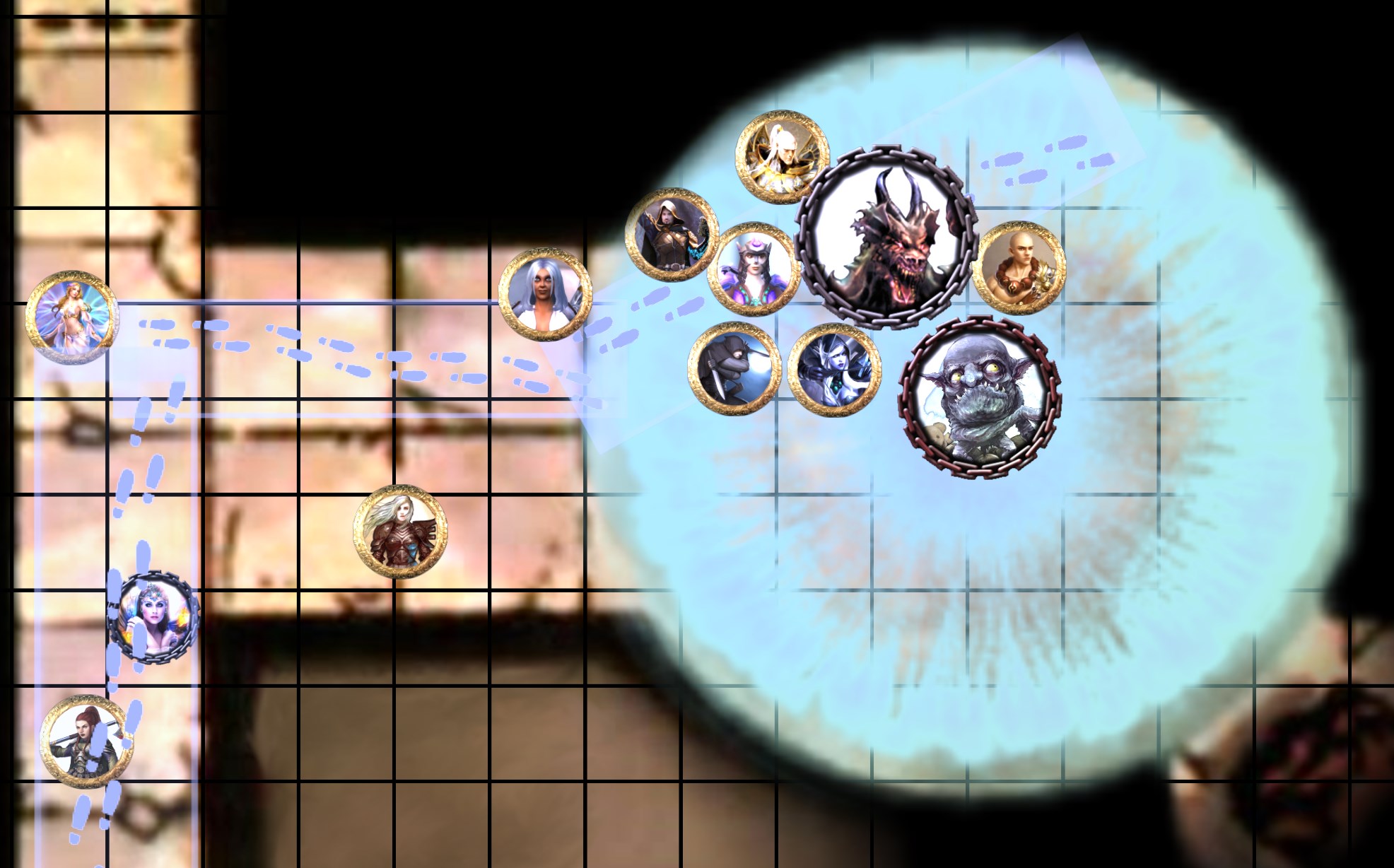 You made short work of him of course. After finding the secrety secret trap door in the floor of this room, you followed the footsteps into a narrow 4 ft. wide crawl space leading west.

The crawl space opened into a larger corridor which you followed north and eventually came to another place where the footsteps stopped. 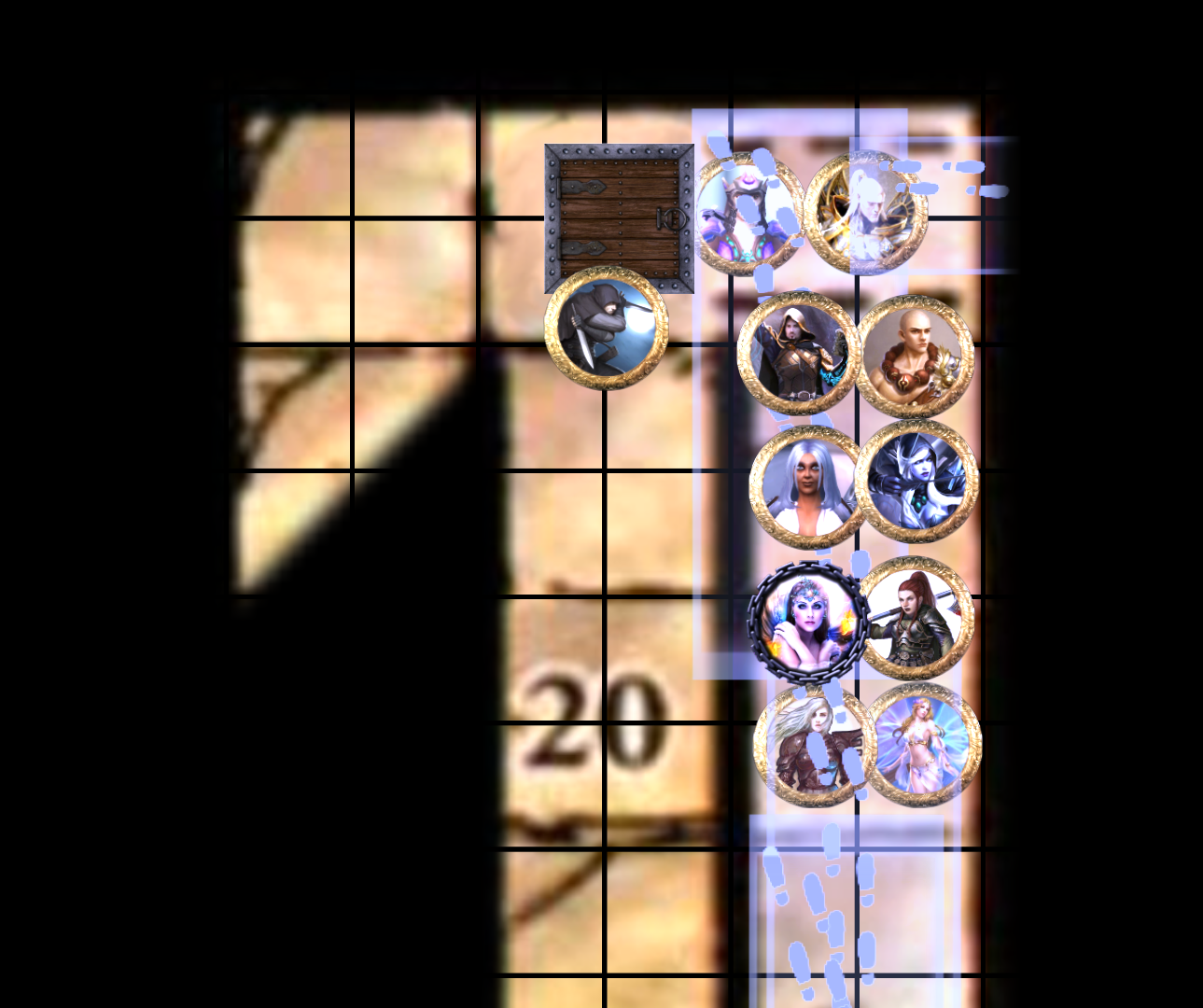 You could see a gargoyle at the end of the southern corridor. 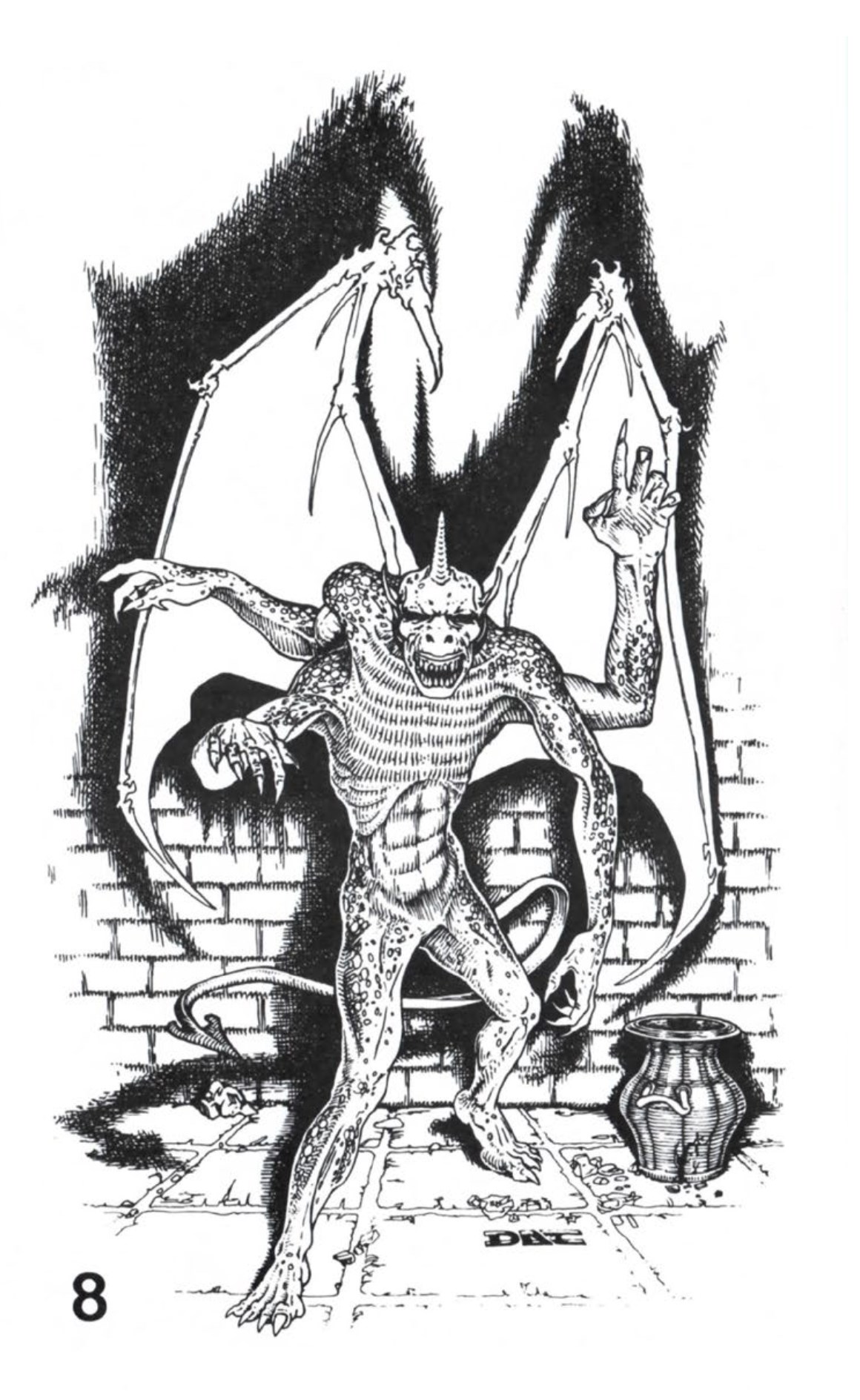 You decided to ignore the gargoyle (how disciplined) and Maxwell pointed out another secrety secret trap door. It opened into another narrow crawl space. This one opened into a chamber with a glowing portal in it.

This chamber is tiled almost completely with sections of dull black stone about a foot square. An archway framed in rough stone pierces one wall. Whatever might lie beyond the archway is obscured by a thickly roiling orange-hued haze. As your gaze lingers upon the arch, the keystone at the top of the arch begins to glow a hazel color, while the left base stone emanates a jade light and the right base-stone glows pearly white. 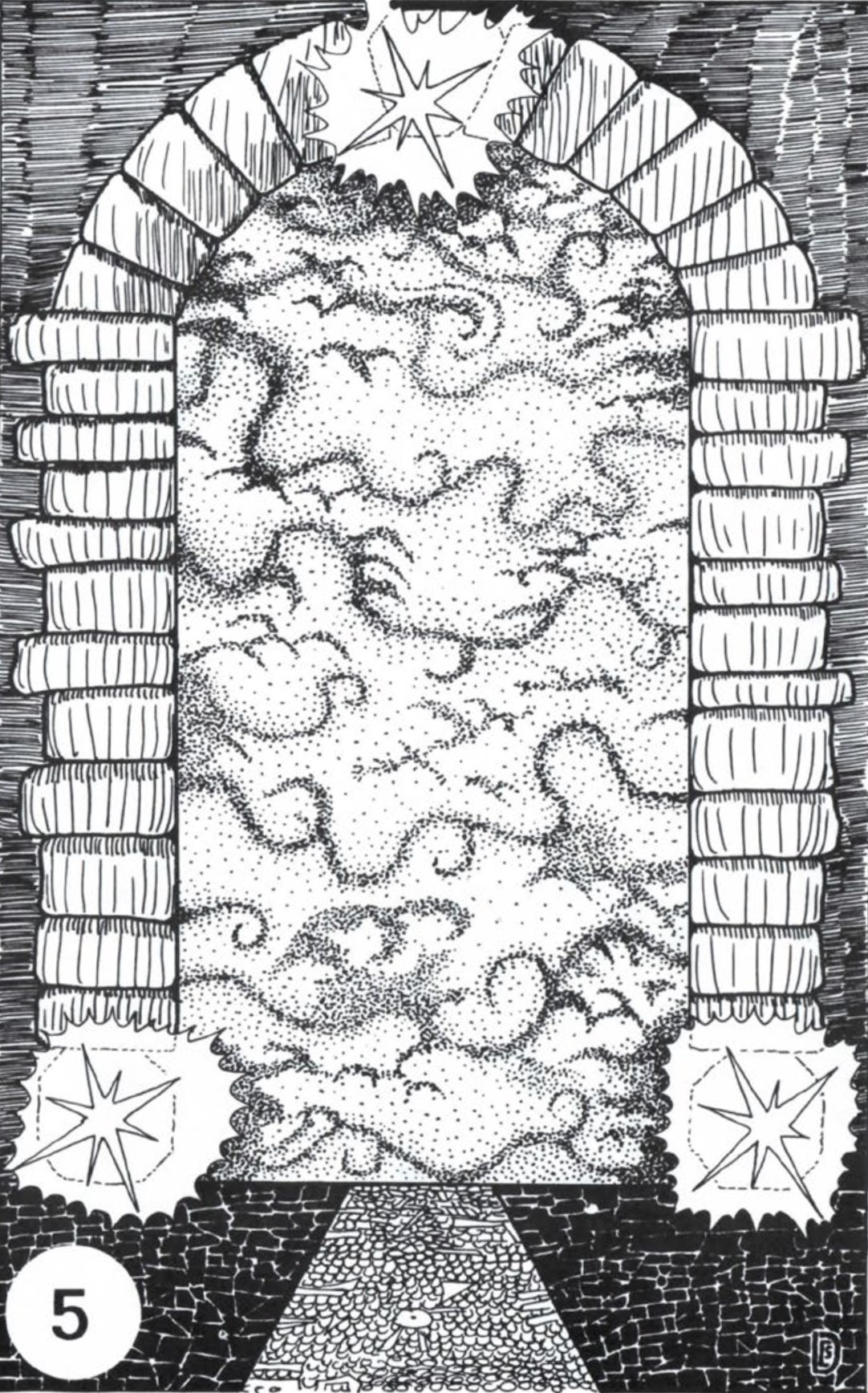 The first people through, Quintus and Brie, were immediately assaulted with a foul stench and attacked. 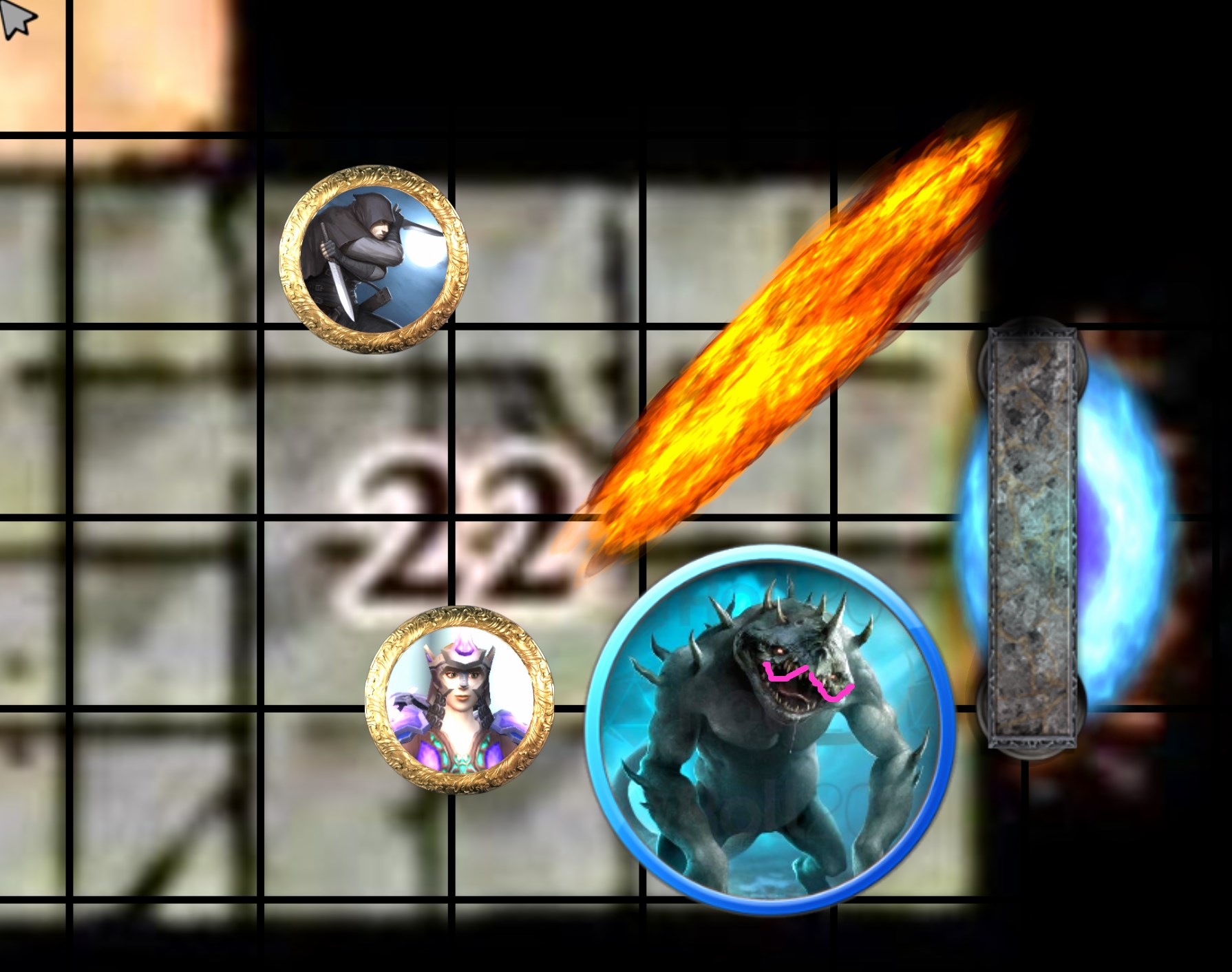 Another demon met a rather quick end at the capable hands of the Legion of Hope.

At this point, as the party readied themselves to continue, the camera zoomed out and we concluded the adventure for the session 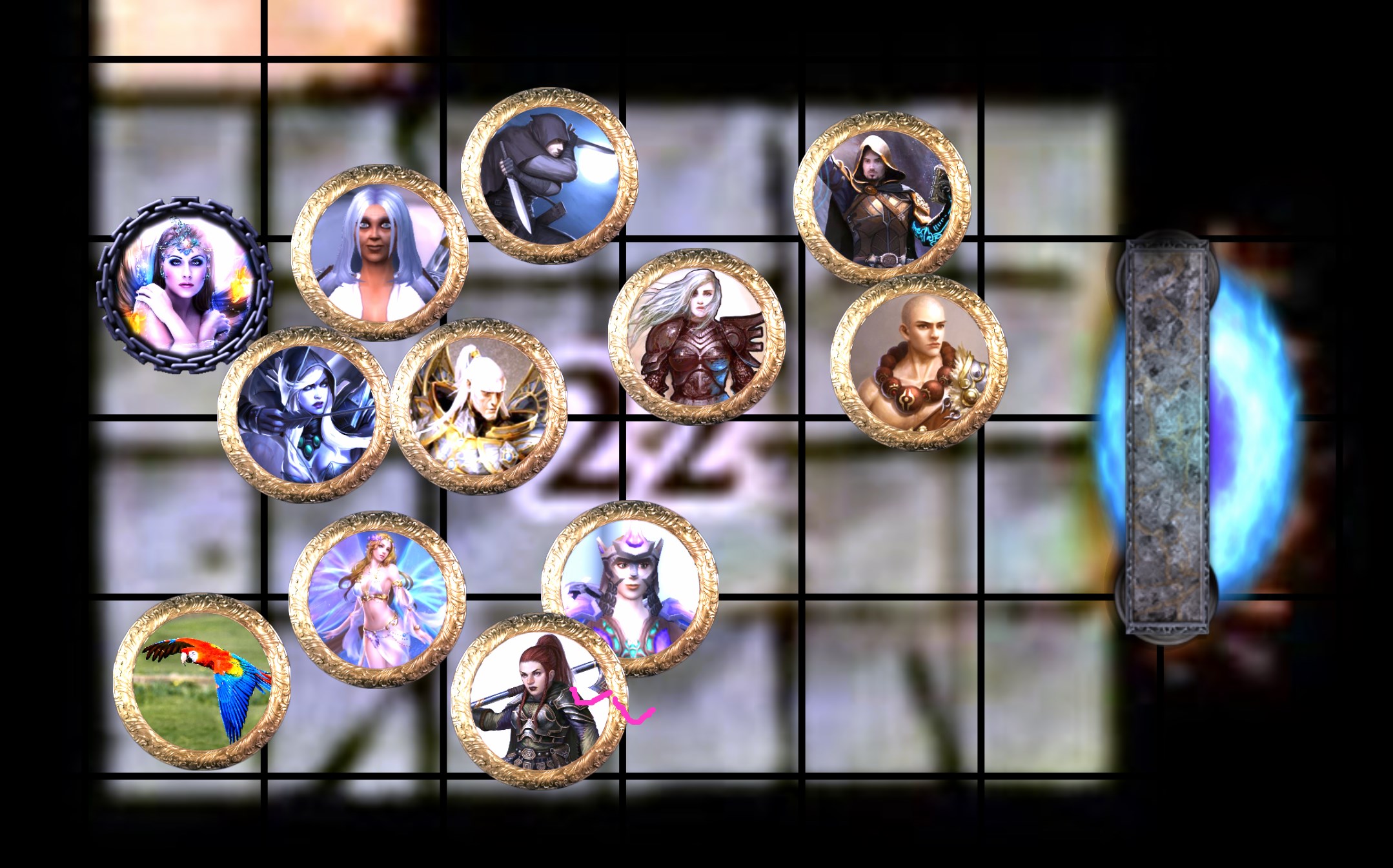 Be sure to join us for the conclusion of the campaign next episode!