The City that Waits exploration begins (what is it waiting for?)

We resumed the campaign in the City that Waits. The intrepid band of adventurer’s find themselves standing on a bridge crossroad.

The camera zooms in as the party is contemplating the obelisk in front of them. Acererk’s riddle is written on it.

As you began to look around, Quintus spotted a faint green light approaching.

It turned out to be a large green lizard

It ran up to you and introduced itself as Sebastian.

Sebastion, using only words that end with tion, guided you to Tower number 2.

You followed Sebastion along the bridge. The end of the bridge lead into an arched opening on the sleek side of a tower of gray stone and metal. The lintel of the arch was skillfully carved with what appered to be a fancifully rendered sunrise (although it initially was covered by a layer of frost).

When you removed the frost, you got the impression that it was a sunset rather than sunrise in the image. Unfortunately, gazing upon the image invoked a powerful sleep curse. Fria missed her saving throw and succumbed to the curse. she collapsed to the ground in a peaceful slumber.

It took two remove curse spells to revive her. Fortunately, she made the saving throw on the second curse removal and woke up.

You briefly explored only one or two rooms in Tower 2. Then Haldir called upon his divine spell abilities to cast a Find the Path spell.

The blue footprints led the party through tower four and to the entrance of tower 5, The Aqueous Tower.

There were no symbols or glyphs marking the entrance to this tower. The bridge ended at the dark opening in the side of the tower. You could smell an briny odor emanating from the tower opening.

When you approached the opening, you found that there was no bridge or support beyond the tower portal. There was just a black chasm of the tower’s interior. You could hear the sound of waves lapping against a shoreline that echoed up from the darkness below with a relaxed rhythm. The sharp odor of salt hung heavy in the air. Immediately to the right of the portal you could see an iron ladder bolted to the interior of the tower. The ladder, pitted and rusted in spots, lead down into the blackness below.

Safwin the bold flew down into the darkness and skimmed over the surface of the dark waters. He dropped a couple of continual light copper pieces into the water which provided some illumination. He activated his cloak of the manta ray and dove into the water.

The murky depths seemed to pull the heat from Safwin’s body as he descended with powerful strokes. Continuing down, he found that ahead of him the rough, white expanse of the salt floor ended with a jagged edge to a still deeper section of the submerged tower. Looking over the edge of the abyss, he spied what appeared to be a wide cave mount in the wall of the rough salt crystal.

At this point Safwin fortunately did not succumb to the bone numbing cold and returned to the surface. He flew up the party, chilled to the bone and tried to warm himself.

Quintus, recognizing the danger of the below freezing water, decided to try to drain the tower. He cast a disintegrate spell on the tower wall. Eeek… The purplish black rays of disintegration struck the tower and reflected back at the caster with unerring accuracy. Luckily, Tymorra was looking favorably on poor Quintus and he made his saving throw to avoid self disintegration.

The Legion of Hope returned to Tower 2 to find a place to rest.

You previously had looked into Room 2.4 The Chamber of Attractions. This time you entered it. When you stepped inside chamber you found a room that was apparently once filled with statuary of all shapes and sizes. Time or some other more destructive force had toppled them all upon the ground; only shattered stone remained. Crumbled and broken torsos covered the floor. The omnipresent rime of ice coated everything.

There was one shape that was not broken on the far wall. As soon as you moved towards it, it drained a few hit points from the party and animated.

You quickly smashed it and moved into the next room.

Frost covered every available surfacein the chamber except for a patch of bare stone that in a humanoid shape.

You set up the insta-fortress which smashed through the ceiling of the room… oops.

After during your rest, the Moilian zombie reconstituted and attacked. 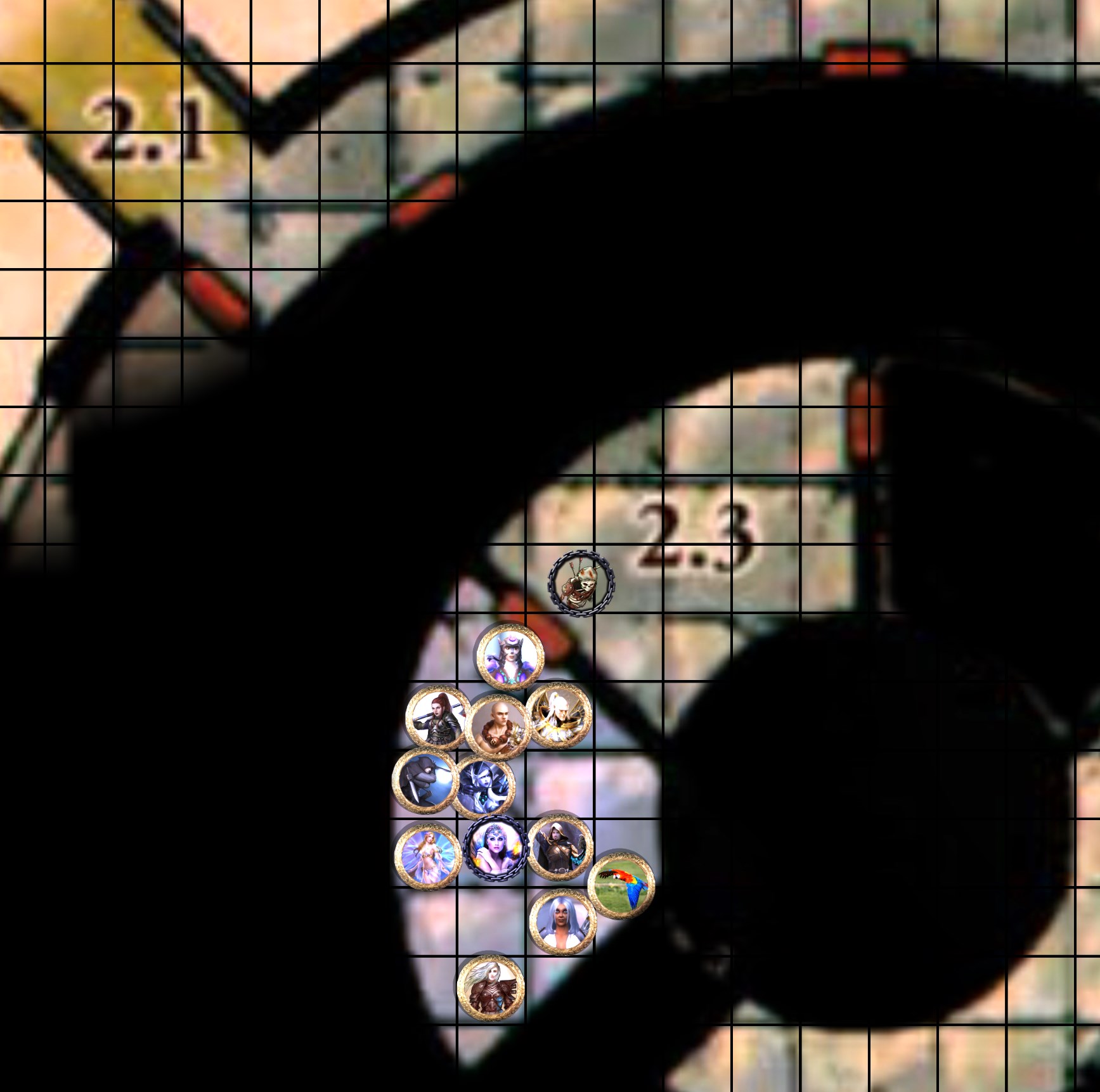 This time you smashed it and burned it. It’s dead Jim.

After resting and regaining your spells, the Legion of Hope returned to the entrance of the Aqueous Tower.

At this point the camera zoomed out and we concluded the episode.